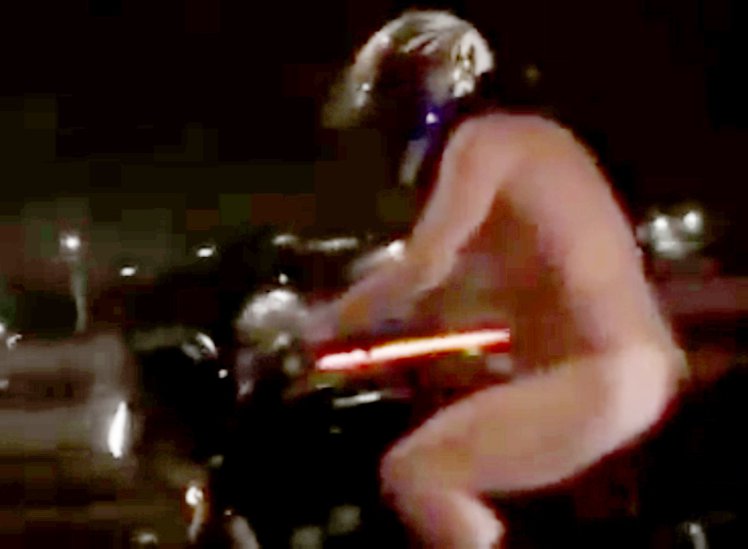 Probably going to get a bit chilly.

Biker gangs are traditionally meant to be intimidating old guys with beards a la Sons Of Anarchy, but the guys featured in this video are a little more off the wall and wacky.

That’s mainly due to the fact that they’re all completely and utterly naked, despite the fact that they’re riding their motorbikes through Moscow – a notoriously chilly city and very dangerous too. Still, they don’t seem to have a care in the world, laughing and sticking their middle fingers up at the truck driver who managed to film them travelling through the city:

Yeah, it’s cool that they’re riding around naked – how could that not be cool? – but I’m kinda concerned about how freezing they must have been. They could have legitimately caught pneumonia. They’re having a ball though so I would just let them be, why not?

Nobody knows who these guys are or what their deal is, but the leader of Russia’s biggest gang the Night Wolves – a guy by the name of Aleksandr Zaldostanov who is also close personal friends with Vladimir Putin – has vowed to get involved and get to the bottom of it for some reason. He even commented on the video, saying:

I do not know what makes them do this, maybe they were returning from a bathhouse and lost their clothes.

Yeah, that doesn’t sound like said it with a smile on his face. These guys are probably absolutely bricking it after they just pulled a simple little prank and now the leader of the biggest bike gang in the country is after them. Oof – let’s hope nothing bad ends up happening to them.

For more naked people, here are 57 of them riding a rollercoaster in the buff. World record or something – any excuse.