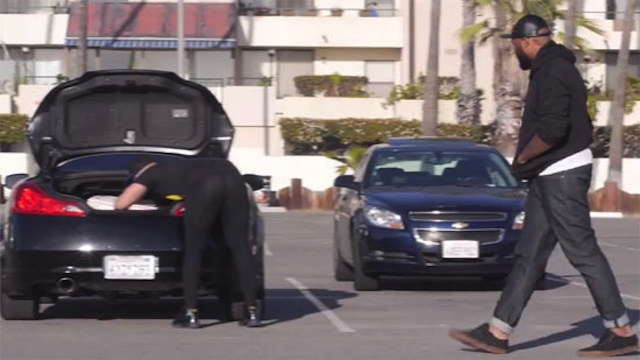 As you can expect there was a variety of reactions, from the threat of death to an unexpected hook up attempt.

YouTube prankster FouseyTube had a really good idea for a prank – he would wear leggings in a car park and bend over the boot of his car while he was putting his shopping away, pretty much creating the effect that he was a woman as nobody would be able to see his face and obviously women are way more likely to wear leggings than men.

The result – countless guys checked out his butt and were completely freaked out when he turned around and confronted them about it. Although most of them are in pretty good humour about it, there are a couple of people that are really pissed off and try to fight him over it and one dude who’s actually pretty into the fact he’s a dude. Bet he probably wasn’t expecting that.