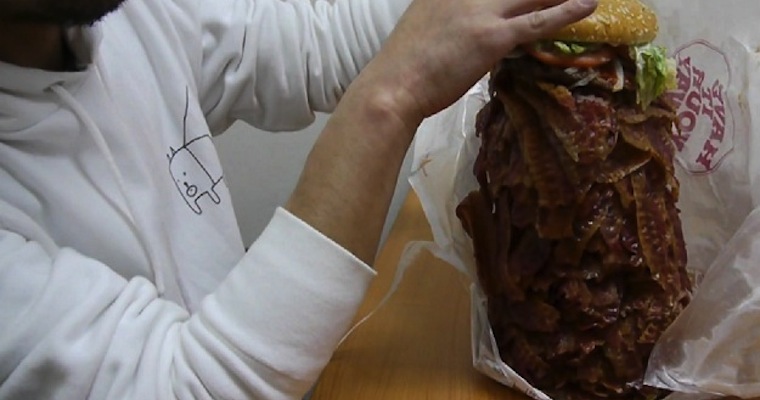 Watch this Japanese guy try to eat a massive burger with 1,050 strips of bacon. The burger looks more like an octopus. 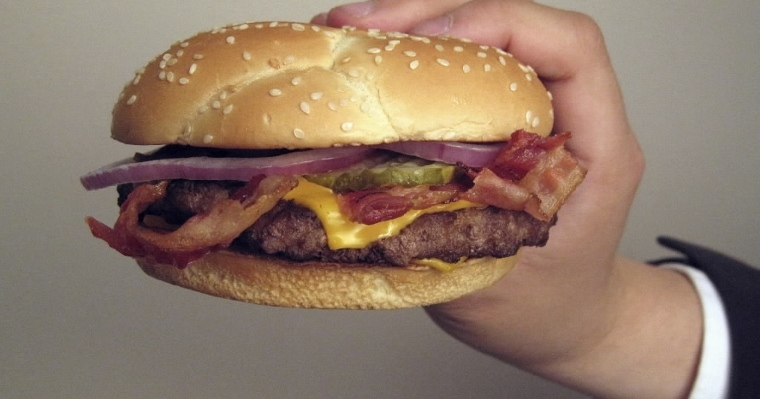 Yo, we all know someone who’s a fat bastard, right? Not necessarily a fat bastard because they’re physically fat as fvck, but they’re someone who prides themselves on how much food they can shove down their gob? Of course you do. Everyone knows someone like that. I’ve never really understood why they think it’s a good thing to be able to eat shitloads. Perhaps they think it’s a good way to chirpse girls but I can tell you, my friends, it’s not. Only the most warped girls would find a guy who’s eating something like 17 steaks attractive on a date, sweat dripping off his chin and saturating the already greased-up plate. There’s nothing attractive about watching someone eat, it’s kind of really weird. Unless you’re Zooey Deschanel. I wouldn’t mind watching her eat.

I’m mentioning these fat bastards that we all know because some guy in Japan really will outdo us all in the fat bastards stakes. We all know Japan is a fucked-up, weird country and they’ve just added something new to their ever-growing roster probably named something like ‘Things Only Japan Can Come Up With’ which certifies their place as a country with the most interesting/weird things and weird/interesting people. Now, think of your fat bastard friend and about that time when you went to the pub with the idea of getting smashed when suddenly your friend sees some hideous burger on the menu, named something suitably gross and cliched like ‘The Belly Buster’ or ‘The Stomach Stretcher’. The burger is a challenge, and instead of one burger it’s like three 12oz burgers and a bucketload of cheese and half a pig. If your friend eats it, they get it for free and a photo on the pub wall or something equally as shit, so of course they’re going to do it while you just sit there, staring out the window, Guinness in hand. And, of course, your friend was chuffed when they finished the hideous beast while you were on something like your fifth pint.

I highly doubt your friend would be able to eat this motherfucker, though. 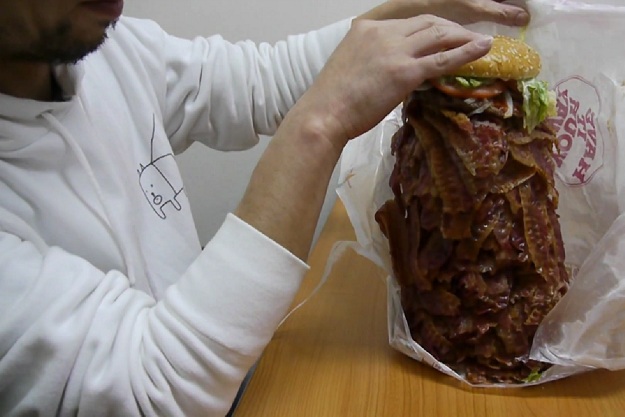 In Burger King in Japan, for 110 Yen or something like 77p over here, they’ll add 15 strips of bacon to your burger. I can hear our fat bastard friends rejoicing. However, some guy went much further than anyone else and added 1,050 strips of bacon to his burger. That’s £54 worth of pig. I dunno whether he actually thought he was gonna eat the monstrosity or whether he was just trying to get famous, but he fails miserably. I can’t really criticise him, though. The ‘burger’ looks like some sort of a mutant octopus with all that bacon hanging out of it and all the grease over his mouth from eating it looks disgusting.

So, here’s the video of the guy and the burger. Show your fat bastard friends and if they genuinely think they could eat the thing, get over to Japan and film them eating it. It really does separate the men from the boys, this one.