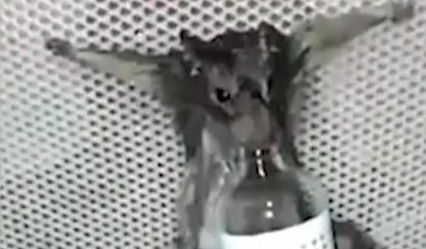 Bit too far there mate.

I haven’t ever had this happen to me, but it must be a completely rank and awful feeling to find out that rats are eating all the food you’ve got stored in your cupboards or whatever. Almost like you’ve been violated.

However, I don’t think the solution to your problem here is to capture the rats yourself and then tie them up and set fire to them in a YouTube video – that’s just bordering on psychopathic behaviour basically. Nevertheless, it’s exactly what a guy only identified as Mr Shi from south west China went about doing.

First he tied up the rat and then forced it to drink Baiju – a strong alcoholic Chinese wine made from rice – before quickly setting it on fire. He then said the following (obviously the video is below and if you want to watch it then you’re more than welcome too, it’s kinda upsetting and grim though):

Look at you, not leaving a drop of wine to me, drink it up!

See how you ate the bread! Now I see how you like it with a bit of fire!

I will explain my horrendous actions.

I was provoked by the rat and it’s vermin. Everyone catches them and beats them.

Well I mean, beating them is slightly different from setting them on fire, torturing them and killing them, but hey, I guess that’s all the same to Mr Shi over in China. I hope he gets punished for what he’s doing here, but it sounds like it’s pretty lax over there about these kinds of things if he’s willing to film himself doing it and put it on the internet. Just saying.

For more of the same, check out this zoo of death over in Indonesia. So sad.