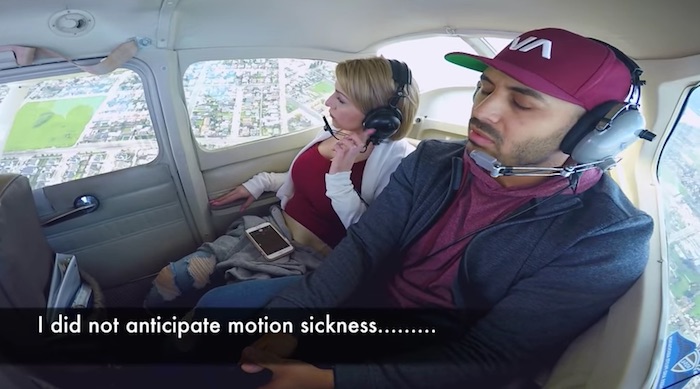 Proposing to someone is a pretty big deal as it could potentially be the most romantic moment of both your lives.

Unfortunately for this dude, he tried to make it the best proposal ever but absolutely ruined it by spewing all over his potential new fiancée. He decided to take his girlfriend on a private plane ride – just the two of them and the pilot – where he was going to pop the question via a massive sign he had erected on the ground.

The guy wasn’t expecting to have to deal with motion sickness from the plane ride though and it looked like he was having an absolutely horrible time from pretty much the moment the plane took off. In the end, he just manages to blurt out a quick “will you marry me?” before keeling over to puke up all over the plane. #Romance:

Yeah, that really isn’t good is it – kinda surprised he even wanted to share it on the internet it’s so embarrassing. It’s great she saw the funny side of it and still said yes, but you can imagine that this story is going to get awkwardly brought up at dinner parties for the rest of their lives. Wait until their kids have to see it as well. Ugh. Maybe romance in 2017 is an absolutely gross viral video of your wedding proposal.

For more wedding proposals, check out this guy who managed to destroy his entire neighbourhood when he was attempting his. Idiot.