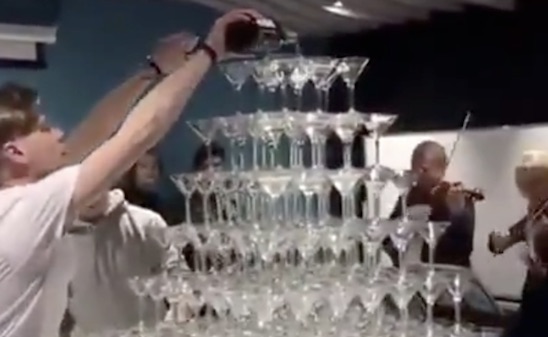 If you clicked on this then you pretty much know exactly what’s going to happen when you press play on the video below and there isn’t really much to it whatsoever.

I guess we’re at some fancy event where there are some classical musicians playing and everyone is excited about getting a glass of champagne from the champagne tower, but the guy in charge of pouring it out had other ideas as he decides to ‘accidentally’ smash every last glass up there. Whoopsie:

Hot damn that’s stupid isn’t it? Kinda wish that the musicians had kept playing when everything was smashing to make it even more dramatic but I suppose you can’t really complain with a video like that. Looked like everyone at the event wasn’t that bothered about it either and just enjoyed the show judging by the reaction. You can bet that guy didn’t get his pay cheque at the end of the night though.

For more of the same, check out Bill Murray teaching you how to drink massive amounts of champagne. Yummy.