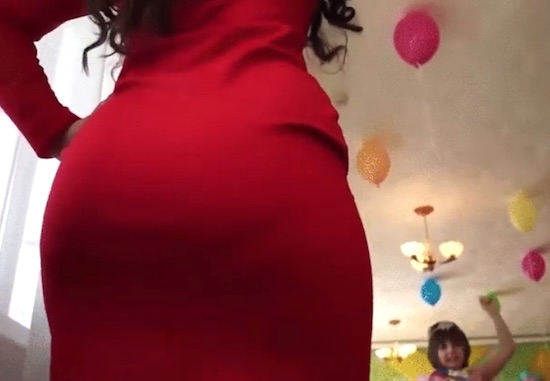 He says it was an “accident”.

It must be kind of frustrating when you’re a middle aged man with kids that never has sex with his wife anymore and has to attend their child’s dance recital with a smoking hot teacher wiggling her ass all over the place. Still you’ve still gotta hold it together and not film that shit like the guy making this video. That’s just another level of sleaze, and after the video goes viral I’m pretty sure your wife, kids, friends and family are all going to call you out on it and that’s not something anyone wants.

Unfortunately, the guy below was just too thirsty and couldn’t help himself from filming this sexy teacher’s flailing butt in her tight red dress. In fairness, I think she knows exactly what she’s doing, but still this guy should be able to control himself in front of his kids, especially at their damn dance recital:

I mean geez, the guy isn’t even subtle about it at all is he? I suppose he is going to bring a lot of pleasure to himself and others in the future, but it’s still a bit pervy though isn’t it? I doubt that teacher knows he’s filming her.

The most perplexing thing about the video though is that people are still listening to Gangnam Style in 2017. What the hell is up with that, I thought that was gone forever now finally?

For more butts, check out what people got stuck up their butts last year. All manner of items.