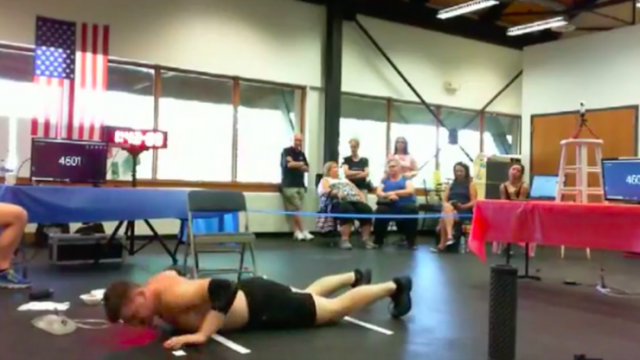 I imagine that most of us here probably couldn’t manage 50 burpees, so to hear that one absolutely trooper consistently performed them for twelve hours straight in order to break the world record is almost enough to bring me out in a cold sweat myself.

The man is American army reserve officer Bryan Abell and he looks like an absolute machine as he attempted to perform 4500 burpees in order to break the world record and raise a whole load of money for charity. He felt so good during the processs though that he absolutely smashed this target and ended up nailing 4689 of the bastards.

What an absolute badass. Here’s some footage of Ben in action:

Bryan Abell from Michigan breaks the Guinness World Record for the most burpees in one day with 4,689 burpees in 12 hours pic.twitter.com/U88o50l0hc

Hmmm not sure if his form there is the absolute best as he’s hardly doing a massive jump there at the end or doing a proper press up, but I think I’ll leave the criticism of the guy because he still managed to bust out about an incredible amount of them in a row when I probably couldn’t even do 50 with having a massive rest in between each one. Respect.

Bryan was raising money for a charity that he founded with his sister called The Stronger Warrior Foundation. Its aim is to ‘to provide help to those who have or are actively serving and their families through financial, physical and mental support.’ Sounds like ana admirable cause. Good work Bryan.

For more of the same, check out the top 5 ultimate workout songs of all time. That’ll help maybe.