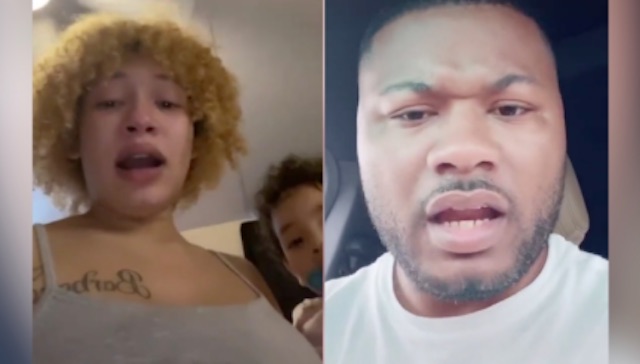 It has to be said that pretty much every time someone posts on social media about being in a toxic or abusive relationship, everybody believes them right away off the bat because you kind of have to feel it’s taken a lot of guts for them to come out and talk about and you also figure that nobody would be so ruthless as to straight up lie about that – would they?

Well, one woman’s latest video is being brought into question by some guy sitting in a car filming a TikTok. The original video can be seen below, where the 30 weeks pregnant woman – who also has a young daughter – is claiming that she’s in an abusive relationship and that her partner trashed the house and that she’s scared and needs help as she needs to move out but has nowhere to go and no money to find a new place:

@big_pablow##foryoupage ##singlemomof3 i know i sound desperate i am desperate & im scared please help me .

That’s pretty distressing and normally I would just believe it and hope that she managed to sort the problem out. Don’t think I could really do anything to help her myself as I’m fairly wary of donating to these causes.

Anyway, one guy wasn’t buying her story and says that it’s all bullshit and that this woman has pulled this kind of scam before, posting a Facebook video that earned her $160,000 only a few months ago and was eventually proven to be fake. Take a look at his thoughts on the matter below:

Yeah, it’s kind of weird that this guy is making this video when he doesn’t have the receipts or any proof to back up his claims. His part at the end when he’s talking about the pandemic and looks really amazed at how someone is doing something like this seems kinda forced and not genuine to me, so maybe has some kind of ulterior motive by posting this video?

Anyway, I did a bit of digging and there are a few receipts hanging around there, but they’re mainly from people claiming to know her/claiming to be the baby’s grandmother which I guess can’t be proven either. A lot of people seems to be following this guy’s lead though and examining her behaviour and finding it highly suspicious.

Take a look at the receipts below and see what you think – you’re gonna have to stop them though because they move fast (the last one is a YouTube supercut of a bunch of them):

Yeah that isn’t really too good a look for her – there are a load more on Collin Skinner’s page too – and it doesn’t really seem like these people would have a motivation for exposing her for being a scammer other than if she actually was a scammer. The internet police seem to have worked overtime to figure it out as well and they’re not usually wrong in situations like this when there’s so much evidence for her being a scammer

Make of it what you will, but it seems like something isn’t right to me. Hopefully it turns out to be false, but her actions would seem to suggest otherwise.

For more of the same, check out the horrific reality of domestic abuse exposed by this truly disturbing photograph. Seriously messed up.