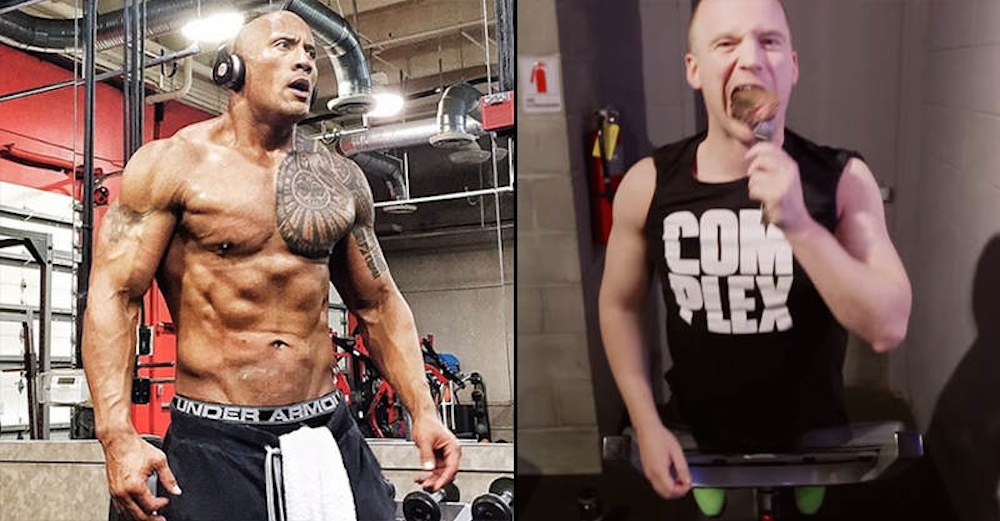 What do you think is going to happen in this situation?

The Rock’s insane diet plan was recently revealed, and it basically involves him eating seven meals a day, all of which are completely gigantic and would probably be enough for one normal person to keep full for a whole day, possibly even two. It’s basically pretty unbelievable, but I suppose if you want to get as big as that then it’s proven to work.

To put just how ridiculous The Rock’s diet plan is into perspective, this guy called Sean Evans attempted it and the results were pretty pathetic, as you’ll see from the video below. I’m not really sure how they could have been anything but that though, because eating that much food in a week probably shouldn’t be attempted by a normal human being, let alone a day.

Here’s what he Bo had to say about attempting the challenge:

Recently, Muscle & Fitness published Dwayne “The Rock” Johnson’s diet. As you might expect, the guy who plays Hercules on the big screen requires a steady onslaught of grilled meats and steamed veggies to keep his biceps on fleek.

Now, I’m no world class athlete. But, compared to the other chain smoking Internet bloggers in the Time & Life building, I’m Bo Jackson. I’m not saying that to brag. I’m saying that to explain how/why I was pegged to live a day as The Rock and how/why I failed so miserably.

Each meal (and there were SEVEN of them) weighed as much as a Range Rover tire. I’d be forking food into my mouth for five straight minutes, and the plate would look exactly as it did when it was put in front of me. Eating became as psychologically taxing as it was physically painful, but–as someone who can eat a whole frozen pizza like it’s nothing–the volume of food isn’t what derailed me.

You see, not only does The Rock eat A LOT of food, but everything he eats tastes like butt. When Complex asked me to do this project, I kept my aversion to fish a secret which in retrospect was probably a mistake. The Rock eats three pounds of cod on the daily. While I might’ve been able to wolf down one eight ounce filet Fear Factor-style, it was the featured entree in almost every meal. I knew by 10 a.m. that it was going to be a long, shitty day. I was constantly dreading the next meal, which had as much to do with hating the food as it did with being ridiculously full.

Ultimately, I failed to complete The Rock Challenge, but quite frankly it was fool’s errand from the jump. I still wear size 30 jeans like I’m a sophomore in high school. Dwayne Johnson, on the other hand, weighs close to 300 pounds and has a body that burns fuel like a furnace. Yet, for whatever reason (probably to make me puke on Internet TV), we didn’t compromise the diet a single calorie.

I walk away with a newfound respect for Johnson. He’s an athlete-turned-professional wrestling icon-turned box office draw, and, at 43 years old, still wakes up at 4 a.m. so he can mainline sweet potatoes and flip monster truck tires. That sort of career path doesn’t happen unless you have something freakish driving you. If it took you a 20-something media guy hurling in his office bathroom to prove that, then you’re welcome, I guess.