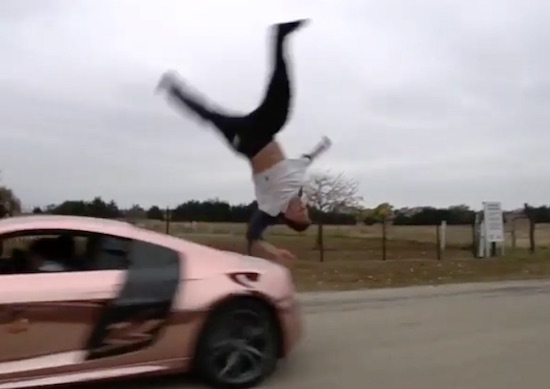 The level of craziness from professional athletes during stunts just keeps getting bigger and bigger and most of the time they can pull it off without getting completely annihilated, but this isn’t one of those times.

This guy called Bailey Payne – who is described as a Red Bull super athlete – was trying to flip over a speeding chrome wrapped Audi R8, but instead of succeeding in this task he completely screwed up and ended up getting absolutely obliterated:

Ouch. Kinda completely and utterly screwed up his timing there didn’t he? A serious amount of flips going on as well. Complete carnage.

I guess accidents do happen like he said. Pretty lucky he got out of it with only a bruised leg though right? Guy must have someone looking down on him.

For more of the same, check out Damien Walters actually backflipping over a speeding car. That’s how you do it.