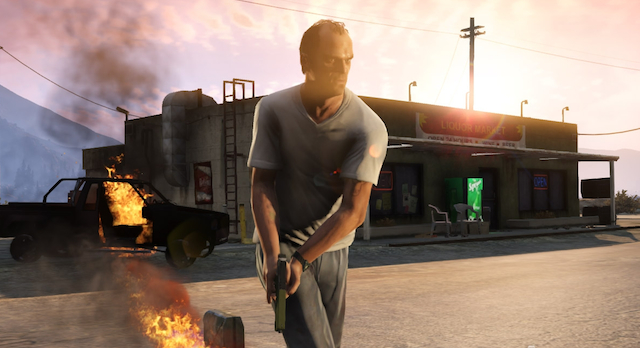 It’s only four days until you can get your grubby mits on GTA V – the wait is almost over. As with any huge release, the teasers just keep on coming and today the first seven minutes of gameplay from the game have leaked and yeah you’re right – it looks completely awesome.

You’re thrown in straight at the deep end controlling a character involved in some kind of bank robbery that goes predictably goes pretty badly wrong. It also highlights several of the unique features that are new to the GTA series, such as the mobile phone and the ability to swap characters.

Sadly, the player is a bit lame and regularly walks into walls, but I’m assuming it’s the first time he played it and the controls might be a little hard to get the hang of straight away. Having said that his shooting is really good which you would expect to be harder, so maybe he was just having a bad day walking around.

In any case, this video is only going to make you even more excited for Tuesday. When you’ve seen this I’m sure you’re gonna be thinking that if this is just the first seven minutes then the whole game is going to be something else.