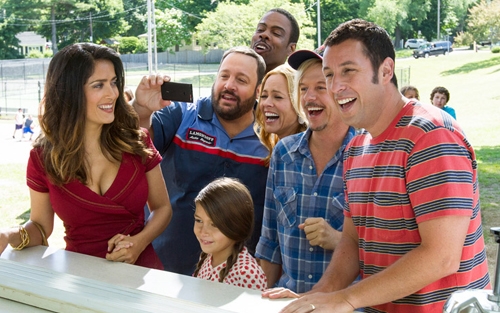 It has finally arrived. The end is nigh. Grown Ups 2 has been released in Great Britain.

Yes the cinematic turd has finally disgraced our shores. Like a sodden, used tampon or a fetid lump of faeces wedged inside a bottle — Adam Sandler’s latest ‘comedy’ is here.

I’ll begin by stating that I haven’t watched the first of the two films, simply because a) it looks fucking shit and b) I wasn’t writing film reviews for an established website back then. After noticing that Grown Ups 2 was opening on Friday the 9th of August the opportunity to tear this turd to shreds was too fun an opportunity to miss. The only thing about tearing a turd to shreds however, is that you end up covered in shit. This is pretty much what watching Grown Ups 2 is most akin to.

Here’s a trailer-based taste of what I unfortunately experienced. Schadenfreude is enjoyable at least:

You may have noticed that the film has been out a week already, so this review is not entirely on the pulse. However, the courage needed to commit to seeing this film took 3 days to build up, and overcoming the PTSD that I developed after seeing it took another few days. Nowhere near as long as those Vietnam-vet pussies take to get over their problems, though. Mopey twats. Actually they should screen this film at a veteran’s day to make them realise ‘Nam wasn’t all that bad. 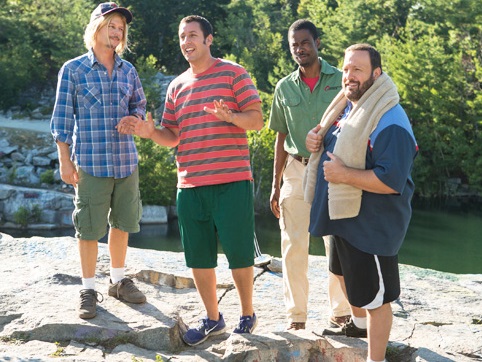 So, onto the problem at hand, the film itself.

The torture begins with a series of unfunny vignettes introducing the lead characters and their clichÃ©d families. Starting with a deer that pisses on Adam Sandler’s face, leading onto a celebration of Kevin James’ kid’s retardation, then to Chris Rock’s family chanting for their baby brother to shake shit around his nappy, then David Spade meeting his estranged lovechild from a one night stand for the first time (who goes on to pull a knife on Spade), and capping it all off with a return to Sandler’s family having that classic family chat about the eldest brother tugging his cock in the shower. Even the little girl joins in. With the conversation. Sicko.

What is presented in the opening is essentially as humorous as it gets, it sets the pathetic tone for the rest of the film. In other genres, setting the tone is good. In a comedy that doesn’t make you laugh within the first ten minutes, when it tries ever so hard to, and also makes you question whether remaining on this planet is worthwhile, it is bad.