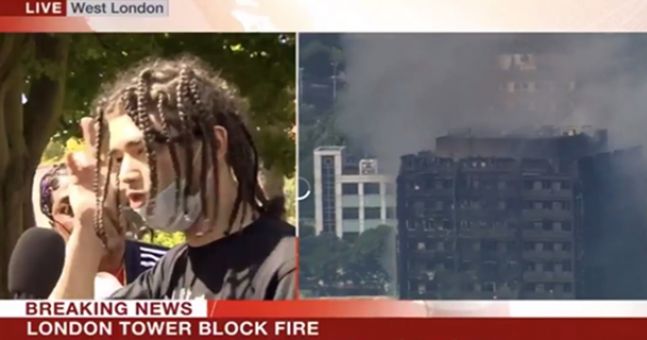 England is still in shock from the Grenfell Tower disaster that occurred in the early hours of yesterday morning, but even as people were waking up yesterday, residents of the area were claiming that it was an inside job and something suspicious was going on.

One of these residents was interviewed live on BBC yesterday and tried to get his opinions over to the public, although the fact he’s a teenager who is swearing is probably going to be held against him. Nevertheless, as a resident of the tower he holds a unique insight into the area, and his points about the government wanting to knock the towers down instead of regenerate them – he argues that the new ‘plastic things’ on the side of the building were added for £10 million but ultimately ended up burning the place down – can’t really be ignored:

Listen to an angry and upset resident of #GrenfellTower. Anyone who lives in London will recognise this story. pic.twitter.com/jZZ3xl5S0D

Yeah, the kid doesn’t articulate himself too well, but you’ve gotta take some of the stuff he said seriously. Particularly when you consider the desperate bid for space in London to build more expensive flats in council house areas.

There seem to be real issues with tower blocks in that part of west London and a lot of his fears were also articulated a few months ago in this disturbing blog post that eerily predicted a disaster like this fire. I’m not normally one for conspiracies, but it does kind of seem like something’s going on here. Just saying.