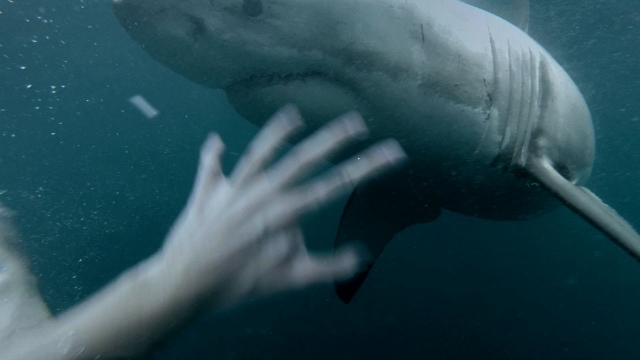 Cliff diver gets the fright of his life after diving off Sydney Harbor only to be greeted by a Great White shark; full encounter captured on his GoPro.

GoPros – you’ve gotta love them. From catching footage of robberies first-hand, to documenting experienced hikers falling to near death, they really can provide fascinating insight into the realities of ‘extreme sports’… if that’s what you want to call ’em.

The footage below shows a guy at Sydney Harbour cliff diving, which is pretty dangerous as it is, but as it’s in Australia, the country where literally everything can kill you, it pushes it up a notch on the whole life-threatening scale.

â˜› More Sharks: Bravest Woman On The Planet Dances With Tiger Sharks At Bottom Of The Ocean

Is this video fake? Yeah, most likely. In fact there’s a pretty telling editing error at 0:59 which pretty much ruins the whole thing. Not to mention this guy is screaming under water and flapping around instead of maybe informing his friends there’s a fucking shark in the water, or something.