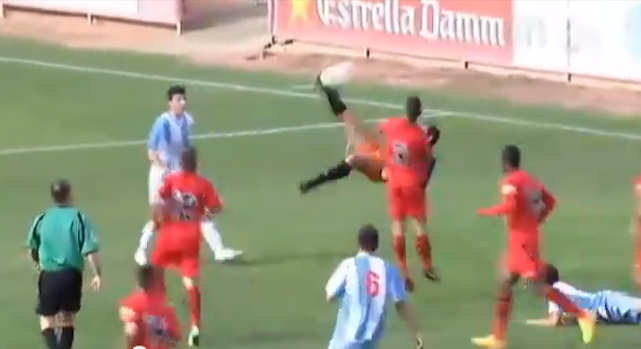 When you’re losing 1-0 in the last minute, it’s really great when your goalkeeper pulls something like this out of the bag.

This actually happened a couple of months ago and I’m not sure how we missed it, but it was just so incredible that I figured it still deserved a place on the site.

The stage was set in the third division of Spanish football, when Mallorca B were playing Alcudia. Mallorca B were heading for their 12th straight victory in their league heading into injury time with a one goal cushion, but Alcudia goalkeeper Bartolome Barcelo had something to say about that.

Nearing the end of the match. Alcudia had a free kick on the left hand side of the area and Barcelo strode up the pitch looking to get on the end of something and force the equaliser. I don’t think he could ever expected what actually did happen though, as he hits one of the sweetest bicycle kicks you will ever see (seriously) to give his team a share of the spoils.

Not surprisingly, he was mobbed by his teammates afterwards.