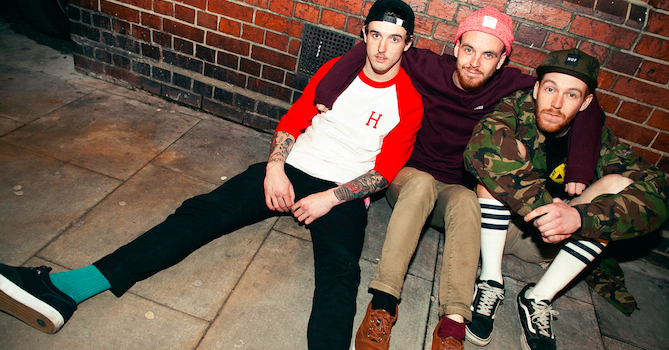 Over the past few years, my interest and faith in Punk Rock music has wavered. Most people you know, including yourself, probably used to listen to it in some shape or form, but inevitably forgot about it or left it behind when a different genre came to light, and ‘heavier’ music became something to remember as a ‘phase.’ At least that was sort of the situation I found myself in. The thing is though; I could never let it go. I love the music and everything that comes with it and I’m getting pretty excited about some of the bands I’m hearing at the moment. The band that tops that list right now for me is Gnarwolves.

Gnarwolves are a band of three dudes based out of Brighton that plays a rejuvenated style of pop punk with a fun, old school skate punk vibe. Their name came from a night in getting stoned and watching Frozen Planet and someone making a joke about narwhals sounding like Gnarwolves and there you have it. I got a chance to hang out with them at a show on their recent tour supporting Broadway Calls and asked them a few questions about music, skateboarding and tattoos. At the top of their agenda is having fun, writing great songs and having more fun. They were three genuinely cool guys who you should go and see because they tour non-stop and anyway… you can read below what we had a chat about…

Could you just say your name and what you play so I can figure out who’s talking?

Max: My name’s Max Weeds and I play the drums.

Charlie: My name’s Charwolf and I play the strings of the bass…

Thom: I’m Thom and I play guitar and sing.

Charlie: … oh and sing as well.

So you’ve just been playing a lot of dates in Europe on this tour in places I’m guessing you’ve not played before, how did that go?

Charlie: Everyone really looks after you and it’s like the best place to play, it’s really fucking cool man.

Was there a good turnout at the shows?

Charlie: We were playing the shows and kids would turn up and be singing along and we were just like what? How do you even know our band?

Has there been a stand out show so far?

Thom: London, since being back in the UK.

Charlie: -Yeah, London was beautiful, like so sick. Loads of kids were stage diving, there was loads of kids singing along and having a really good time, so yeah, London definitely has been a highlight of the tour.

Thom: I’m Looking forward to the next few days though, they’re gonna be fun as well. The next few days are towns we’ve been to quite a few times so it should be nice to check in with everyone again, it’s gonna be a laugh.

Definitely. So my next question is about the new EP that’s coming out in a few weeks. When was that recorded?

Thom: Yep, it was recorded literally the day before we went on tour; we finished it and then had to drive to the first show of the tour straight away.

Any track names you can give me?

Charlie: and the record is called ‘Funemployed.’

*(Sorry if I got any of those names wrong, it’s quite possible I did)*

Was skating a part of the scene you grew up in or did you find the music and skateboarding separately?

Thom: I think when we grew up it was that first wave of Tony Hawk, I remember when I was about twelve or thirteen and that’s how it came about for me.

Charlie: If you look at most Punk bands… like everyone played games n shit and everyone got into music through games. But at the same time we just skate every day ‘cause we really enjoy it and it passes the time, it’s really good fun.

Max: Skateboarding and Punk Rock goes together so well. It’s such a chaotic process. You hurt yourself in both things, they’re both an art and both the most fun things you can do. You play a Punk Rock set and you’re hurting, you skate and you’re hurting but that’s what you like about it…

Charlie: Yeah like before the set you go for a skate and you’re pumped like ‘Shit I just had such a good skate,’ but at the same time you can have such a shit skate and you feel like shit… (laughs) you know what I mean, there’s good and bad to it. Skating’s fun, music’s fucking sick.

Let’s talk about tattoos, you’ve all got ‘em. Have you got any tats from this tour?

Charlie: Err… actually, no… Me and Max usually like piss around with needles and stab each other up but not on this tour so far, which is weird really…but I do have tour tats.

(Since this interview, however, I think they did go and get tattooed on this tour)

And you’ve all got Gnarwolves tattoos?

Charlie: Yeah we all do, like me and Max have both of the record names somewhere on our body and Thom’s got a sick wolf like throwing up from the inside of our ‘CRU’ record and it looks fucking cool. We don’t really think about it, we just do it cause it’s fun.

Thom: Yeah I think a lot of being in this band is about making really poor life choices (laughs) but yeah it’s really fun.

Do you have a best or worst since being in this band?

Thom: The worst that I have is an old man roast (I think that is what was said) tattoo that-

Max: What about those two stars that you’ve got on your chest?!

Thom: Not since being in Gnarwolves!

Thom: No I love all of my tattoos, I’m proud of everything I’ve ever done, I’m still alive now so I must be doing alright! But yeah it’s of a guy I’ve never even met before and I probably never will because the lady who did it is a friend of ours and she was doing an apprenticeship but doesn’t work there anymore and the tattoo is the head of the guy who runs the tattoo studio and it’s on my arm…and I’ve never met him.

Max: The same girl who makes our skate wax…

Charlie: Yeah, exactly, that’s the thing. It’s about memories. You look at your tat and you go ‘Ah, where did I get that…that was when we had that sick time there’ or wherever we were and it makes you remember shit…. It’s an addiction I can’t get out of so help me. (laughs)

Something else I want to talk about is UK Punk Rock

What do you think about the UK scene at the moment?

Charlie: It’s really cool. It’s always been fun. There are tons of venues to play and there’s tons of kids wanting to play so it’s just fucking cool man.

And how does it compare, playing shows with bands like Broadway Calls and The Story So Far, these US bands who have a pretty big following, to a Punk n Pasta night? (a local night they played in Brighton when getting started)

Max: You know that one?

I did some research…

Max: Or through people we knew from times when we’d toured before in previous bands.

Thom: Yeah, so there was like an element of community there… which has transferred over though absolutely when we started playing with slightly bigger bands, but it is different.

I mean the music still stands…

Thom: Yeah I mean all these bands have come from the DIY scene in their own town and been able to grow because people wanted to see them who they didn’t know and that’s all it was… so they had to get their shit together.

Charlie: Also you get to go to places you haven’t been before, you know. I hadn’t been to Manchester before this band, you know what I mean like… I get to go and see the fucking cool places and hang out and that’s what I want to do. Just go everywhere and explore…and find as many skate spots as I can, (laughs) meet some really cool people. There are always really cool people at shows. Everyone is so nice. It’s beautiful.

Well I’m glad to hear it. I guess I’ll have to wrap it up soon so I’m just gonna ask some quick fire questions like err…

Have you got a favourite food…

…or drink on tour?

You’ve also shown some love for K Cider, what’s your drink of choice on tour or otherwise?

Charlie: Well, not on tour but I do drink that quite regularly

Max: Gin and Juice because it doesn’t bloat your belly up so much… and if you drink K Cider you can’t actually play stuff

Thom: And tea as well actually I’d like to point out

Max: I like water too actually it’s really nice.

Charlie: Over the past couple of days we’ve had a lot of whiskey and coke cause it’s something different.

Max: I’ve been spewing every night, seriously. I can drink beers but drinking spirits I spew all the time (laughs) it’s pissing me off.
Charlie: Nah but gin and juice, K Cider…actually fuck it, anything man-

Thom: Yeah we’re not that fussy really. I like red wine at the moment I’m quite into that.

Max: Yeah, as long as it’s not like Carlsberg

Thom: Yeah anything but fucking watered down-

I noticed between sets bands like Tigers Jaw and Title Fight were playing on the P.A., is there any other more current bands that you’re listening to at the moment?

Charlie. Yeah, well those are two bands that we really like but for me like new bands, maybe… Otto, Nai Harvest and Moose Blood.

Yeah Great Cynics were really good earlier I’m glad I got to see them. Right I’ll actually wrap it up this time, is there anything else you’d like to say?

Max: Thanks to everyone that has been really nice to us

Charlie: Yeah, thanks everyone that has supported us so far and actually like come to our shows and enjoy how stupid we are and look after us.
Thanks to our friends who still want to come to shows even though they’ve seen us about a million times

Max: Cheers to Richard and cru for letting us stay on their sofas

Charlie: Yeah thanks to Richard and that cause they’re fucking dudes

Max: Cheers to Thom for letting us stay on his sofa last year

Charlie: Yeah cheers, I’d like to thank Max and Thom for looking after me cause I’m an idiot (laughs)

Max: Yeah we’d like to thank each other for being in Gnarwolves (laughs)

Charlie: Let’s not get too emotional..

Thanks a lot guys it’s been a pleasure talking to you.

Check out the video to Gnarwolves’s song ‘History Is Bunk’ below. It’s an absolute banger.