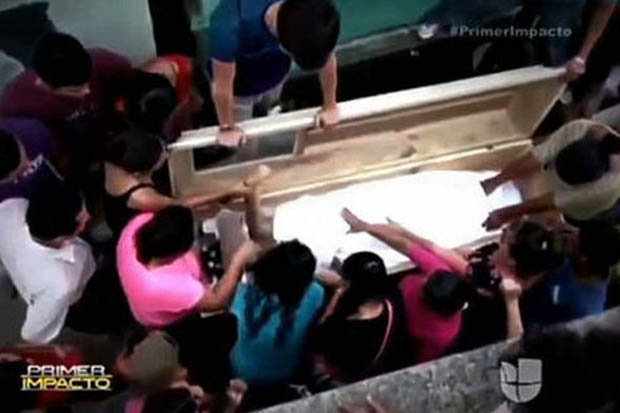 Burying your girlfriend is probably going to be one of the most traumatic experiences you’ll ever have, but it would be about a million times worse if you hear her screaming from inside the coffin.

That’s exactly what happened to this unfortunate 16-year-old named Rudy David Gonzales from La Entrada, in western Honduras. His girlfriend Neysi Perez – who was pregnant at the time to make matters even worse – apparently suffered a heart attack after she heard gunfire near her house.

Assuming she was dead as she had no pulse and couldn’t move, her family decided to bury her in a coffin at the local cemetery. But both Gonzales and gravedigger Jesus Villanueva claimed to hear noises coming from her tomb. As such, they decided to dig up the coffin and see if she was still alive, and for some reason they also decided to film it too:

I’m actually speechless for once because that is completely weird behaviour from them trying to shake a dead body awake isn’t it? Perez was eventually taken to hospital where doctors were unable to revive her and she was returned to her original grave. The local community denounced Gonzales and Villanueva’s claims that they heard screams and just put it down to their imagination.

But there’s a twist in the tale. There was enough evidence inside the coffin to suggest that Perez was actually still alive. Her knuckles were scratched and bloody and a glass panel at the top of the coffin was smashed, which kind of suggests she was trying to bash her way out of it after being buried alive. It’s being speculated that she suffered a cataplexy attack – a severe form of panic attack brought on by extreme stress, which leads to muscle paralysis and a temporary loss of heart beat. Absolutely brutal.

For a similar story with a happy ending, check out the tale of this cat that was dead for five days but turned up alive. Zombie.