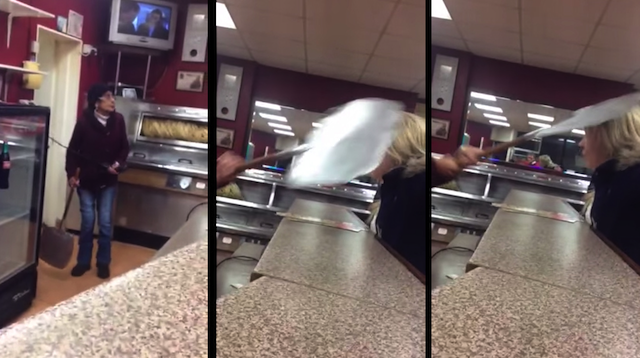 When you’re pissed off with someone in a takeaway, just hit them with the nearest shovel, naturally.

This argument looks pretty serious – as is often the case with late night arguments in takeaways – although unfortunately we’ve got no clue whatsoever what it’s about because they guy who filmed it started filming it way after it started kicking off.

Crucially though he did manage to capture the woman at the takeaway’s ridiculous reaction to the girl screaming and shouting at her which was to grab the nearest shovel (in reality it was really a baking tray with a handle but whatever, a shovel sounds way funny) and whack it over the girl’s head.

You might think that it’s not really funny to highlight violence like that, but when you see how lame a shot it is then you’ll understand why it’s so hilarious. The girl doesn’t even stop mid rant it’s so pathetic. It’s nowhere near as painful looking as this shovel knockout from earlier in the year.