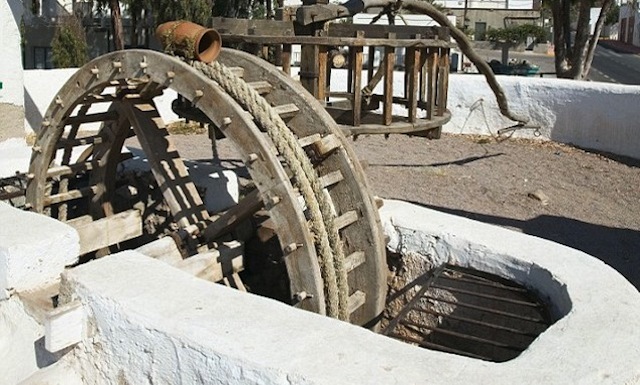 A half-naked woman had to be rescued by firefighters from the bottom of a well after falling in while having sex with her boyfriend in a park in Spain. Her boyfriend just pulled his pants up and ran off.

A half-naked woman had to be rescued by firefighters from the bottom of a well after falling in while having sex with her boyfriend in a park in Spain. The young pair were having sex on the cover of a waterwheel well shaft when it suddenly came loose and sent the 21 year old plummeting 15 metres into the water below. Luckily she didn’t crack her head anywhere and lose consciousness, and she knew how to swim so she managed to keep afloat until she was rescued.

What did the boyfriend do to help though? Sweet F-all. Instead of trying to rescue his girlfriend, he pulled up his trousers and fled the scene.

An anonymous phone call later led the rescue crew to the girl. This could have been the boyfriend suffering from a guilty conscience I suppose, but obviously that doesn’t excuse him not rescuing her in the first place.

But yeah, you know when you’re too lazy/too much of a pussy to break up with someone who you’re not really feeling anymore because you don’t want to hurt their feelings/hate confrontation, so you plan to just ride it out until your partner becomes sick of you and ends the relationship? That is definitely the situation this guy was in here. Was probably already being a massive dick to her, not returning her texts and acting like a single dude and whatnot. Probably couldn’t believe his luck when she fell down the well.

Looks like he’s got what he wants now, only with an even bigger problem to contend with. Police want to speak to the guy and could charge him with failing to give help to somebody in need of assistance.