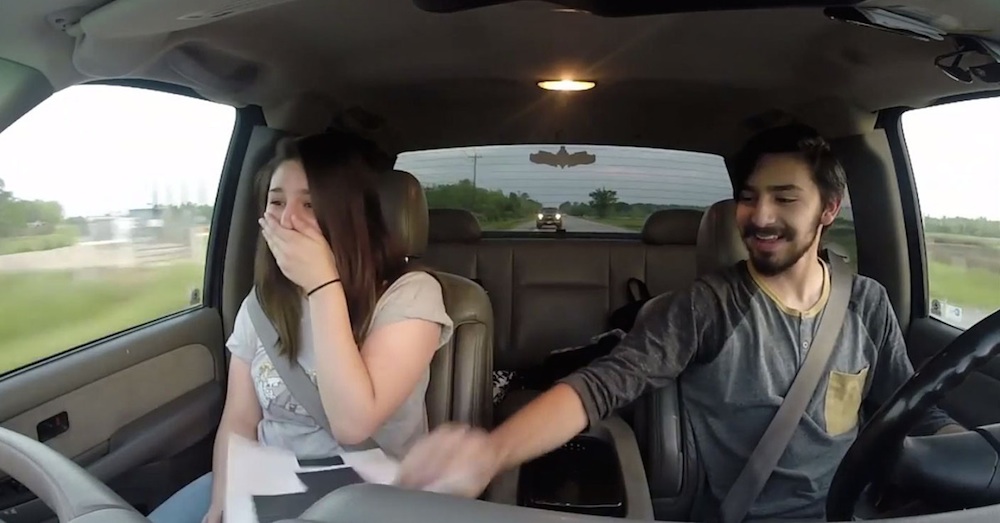 Apparently filming your prom proposal is now a thing in America which I suppose makes sense because it’s a humongous event over there and you’re definitely going to want to remember how you asked some girl from high school – who’s inevitably going to break your heart when you head to college – to prom ten years later. Or perhaps even eighty years later when you’re really old and bitter about it still – I’m sure that’s a memory you’re going to want to relive.

As for the dude in this video, he probably doesn’t ever want to relive this prom proposal because it goes about as badly as you could ever imagine anything to go. His idea was to put up some signs and then drive his girl (not sure if they’re even going out, it isn’t really clear from the video) past them as they spelled out ‘Alex. Will. You. Marry. LOL JK. Go To. Prom. With Me.’

Romantic huh? Well I don’t want to spoil it but it doesn’t really go how he planned at all and the result was laugh out loud funny (for me at least). Next time maybe he should get Bryan Cranston to ask his girl to the prom for him.

I’m not really sure why this dude thought it would be a good idea to put this on the internet – or even show anyone ever – because he’s probably going to get mercilessly ripped for it for the rest of his life, but hey I don’t even really understand the concept of a prom proposal video so what do I know?