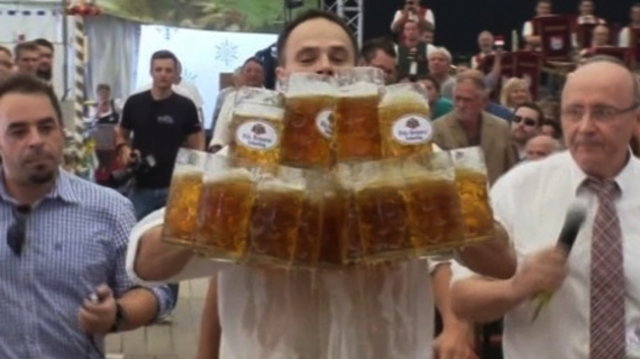 A German guy called Oliver Struempfel has put 17 years of working in a beer tent at the Gilamoos beer festival to good use by breaking the record for the most amount of beers ever carried by one person. He managed to carry 27 full litre mugs of beer for 40 metres using only two hands, which is a damn impressive feat however you choose to look at it.

Oliver had this to say about his amazing achievement:

I have worked here in the beer tent for the past 17 years, so I have lots of training. It is no longer enough to just carry the mugs, but you have to support the training by going to the gym, especially in Winter when you don’t get much time carrying the beer mugs.

He sounds like a serious guy. Now all he needs to do is master opening beer bottles and he’ll be the ultimate bartender.