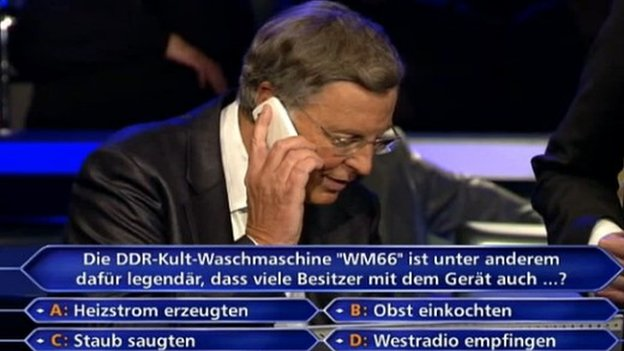 What a waste of a lifeline.

Unbelievably, they’re still making new episodes of Who Wants To Be A Millionaire in some countries, and even more unbelievably it’s so successful that it still warrants a celebrity edition of the show. We’re looking at you Germany. However, if this wasn’t the case then we wouldn’t have this unbelievably stupid story so I guess we should be thankful too.

Some German politician called Wolfgang Bosbach had managed to win 125,000 Euros on the show (not bad) but was having some trouble with the 500,000 Euro question – which is fair enough because that’s usually a hard one – and so decided to phone up his good friend Angela Merkel – you know, the Chancellor of fucking Germany – for help.

And that’s exactly what happened. Mr Bosbach was all set up thinking he was gonna look like a complete badass and super important on television – even saying that Merkel was ‘always happy to see me and hear my voice’ – by phoning up the leader of the country and getting her to answer his question, but instead he just ended up looking completely stupid when he got her voicemail. Twice. Way to blow it dude – I’ve never even seen anyone not get through to their Phone A Friend on Who Wants To Be A Millionaire, although admittedly it’s been about a decade since I watched it. Absolutely shut down.

If you’re interested the question he didn’t get concerned the East German washing machine and why it had ‘legendary status.’ The answer was that many of its owners wouldn’t use it for washing clothes, but instead to stew fruit. Apparently that was something people wanted to do during communism. Bosbach didn’t fancy a guess after being stood up by Merkel and took the money and ran, like most politicians.