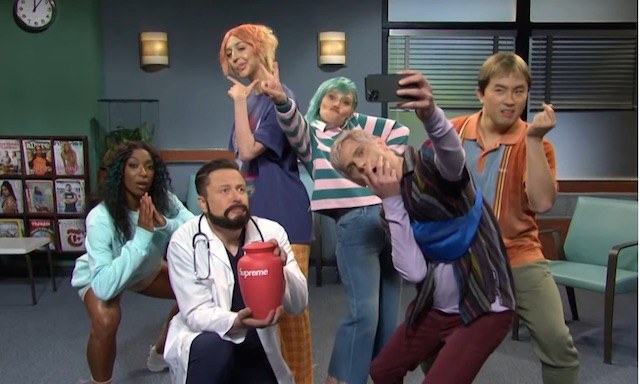 I’ve never really understood the American obsession with ‘Saturday Night Live’, but it’s been on the air for something like 50 years and everyone in the whole country seemingly tunes into it.

Obviously it was a big deal this weekend because Elon Musk was set to guest host it and there was high expectation that his appearance would send the price of Dogecoin through the roof, but the reverse actually happened and the cryptocurrency plummeted almost as soon as he opened his mouth. Things didn’t get much better for Elon from that point on, as the following ‘Gen Z Hospital’ sketch that he featured in is being called the worst skit in the history of the show – that’s quite an audacious statement hey?

Anyway, you can watch it below if that sounds like something that would appeal to you, but maybe check out the reactions underneath that first before deciding if it’s worth it:

I reactivated my Twitter just to say “Gen Z Hospital” is the worst SNL skit of all time and the single worst piece of television I have ever seen.

Gen Z hospital is exactly how you all sound when using aave incorrectly.. pic.twitter.com/WMfovsG7S3

Ok I watched the clip of #SNL gen z hospital and as a millennial, I would be fine if literally everyone on that show gets fired and they kill SNL. That was maybe the worst skit ever, I've literally seen better skits in my high school homecoming assembly.

The Gen Z hospital skit reminded me of the pain you feel when a old teacher tries being 'hip with the kids' pic.twitter.com/JC98xmXakq

how SNL expected everyone to react to gen z hospital vs how everyone actually reacted. pic.twitter.com/ruyFxyKeYZ

That really wasn’t very good was it – although I did laugh when the urn had a Supreme logo on it – but it didn’t really strike me as being particularly worse than anything I’ve seen on the show over the years. Always thought it was a pretty low standard of ‘comedy’, so it’s kinda surprising to see everyone get so riled up about it. Probably more because of Dogecoin plummeting.

I’ve gotta say that Elon Musk really does come across like even more of a shifty weirdo than usual in that sketch. Maybe that’s partly because his Gen Z doctor is supposed to be like that, but I think he’s channeling his own strange energy more to be honest. Freak.

For more of the same, check out Elon Musk wiring up a monkey to play video games with his mind. Awesome.