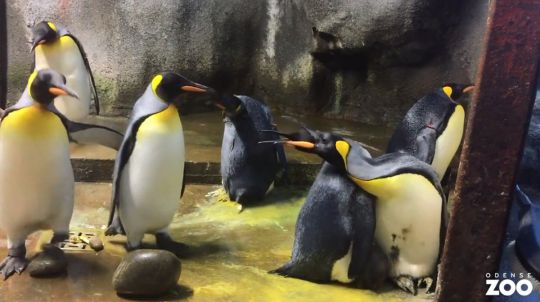 They were desperate to become parents.

It seems like it’s fairly difficult for homosexual parents to have children over at the moment – although it is possible fostering seems to take a while as does finding a surrogate etc – and it seems like this is no different within the animal kingdom, as this story illustrates.

We’re coming at you from the Odense Zoo over in Denmark, where it’s been recently reported that two gay penguins recently spotted two straight parents neglecting their baby penguin and decided to try and kidnap him and raise him as their own. A zookeeper named Sandie Hedegård Munck explains the situation:

I could see that something was completely wrong.

The parents disappeared and the kid was simply kidnapped. It was a pair of gay males who had snatched it and was stood with it.

The mum had gone for her daily bath and when she didn’t return in time for the dad’s swim he forgot all about his parental responsibilities and left the baby by itself.

When they saw him alone they probably thought “that’s too bad, we’ll snatch it”.’

I expected the parents would return and demand the child back, but the male was strutting around like he’d never had a kid.

We would have let the gay couple keep the baby if the parents didn’t come looking for it, but eventually they did and the baby was returned to his rightful parents.

However, we were so impressed with the gay couple that we gave them an egg from a new mother who was unable to take care of it.

Wow. What a cute story where everybody ended up happy, except maybe the father of the child who sounds like a bit of an asshole to be honest. He should probably be banned from looking after the kid on his own ever to be honest. Deadbeat dad.

For more of the same, check out the last thing you would see if you were eaten by a penguin. Scary.