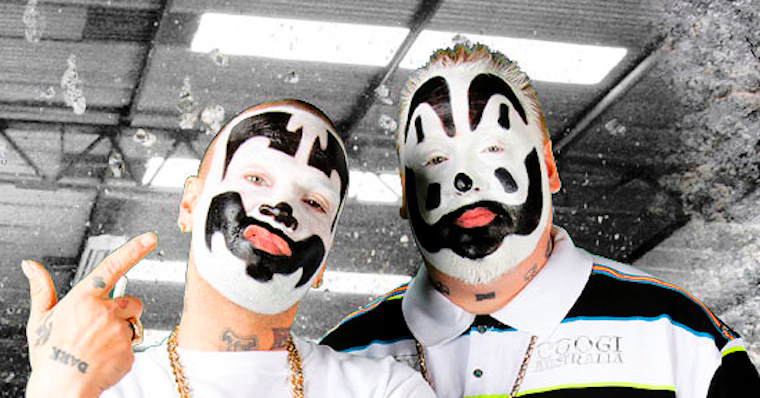 The Juggalo movement has never been dumber thanks to the release of this new infomercial for their annual festival, the Gathering of the Juggalos.

A 25 miunte infomercial has been released advertising the next Gathering of the Juggalos. Yeah, you read that right, it’s 25 minutes long. Obviously I thought this was going to be hilarious given that it’s about the Gathering of the Juggalos so had to check it out. I expected a bunch of weirdoes dressed up in clown masks dancing around shouting whoop whoop and throwing Faygo over each other and yelling stuff like ‘down with the clown’ and chatting about the Great Milenko but what I actually got was some weirdass general in a really bad CGI’ed wasteland shouting about how there was a zombie apocalypse and that the only place survivors could hang out and listen to cool music was at the Gathering of the Juggalos. Um which brainiac decided to come up with that idea?

Admittedly this sounds like it would be just as hilarious but firstly I don’t understand at all why they thought they would advertise it like this and why the hell they didn’t just show a montage of all the stuff I just mentioned and maybe some clips of the bands that are playing (you know, terrible rap metal bands who somehow still manage to attract people to their gigs like (Hed) PE and Kottonmouth Kings and Mushroomhead) and maybe have Shaggy 2 Dope playing around with a magnet or something. I know zombies are very in at the moment with bath salts and that guy eating the other guy’s face but surely Juggalos don’t need that crap to come to the party anyway, as surely Gathering of the Juggalos is what they’ve been looking forward to all year right? Bizarre. Or Twiztid. Or maybe they were trying to make the subtle point that everyone at Gathering of the Juggalos this year will probably be on bath salts. Probably not though because I feel like subtlety isn’t the strong point of a juggalo.

The other thing about this infomercial is that whoever directed it is a fvcking moron because it’s really boring. I was ready to watch all 25 minutes of it with a zoot and laugh my ass off but I couldn’t even do that because the actor playing this general guy in his stupid compound is so fvcking boring and talking absolute shit (and not even in a funny laughing at it kind of way) that I had to turn it off after like two minutes. The production values are also completey terrible and it looks like something that would have felt dated in Gamesmaster 20 years ago. Smooth moves jugga-lugga-lugga-los.

I skipped around and saw some footage of the bands playing but overall it’s just really really bad. I guess this kind of thing might appeal to juggalos but I really don’t know because it seems really stupid and boring and juggalos are only one of those two things. Anyway if you fancy checking it out the video is embedded below. I would recommend just spending 22 minutes watching American Juggalo – a documentary about the Gathering of the Juggalos – instead though because that is actually hilariously great viewing. Alternatively, if you’re worried about alternatives to the Gathering of the Juggalos should a zombie apocalypse actually happen then maybe check out the Sick Chirpse Stoner Guide to Surviving the Zombie Apocalypse.  Up to you though. No doubt that the Gathering of the Juggalos will be a great event again this year though and well attended, even despite this dumbass infomercial.