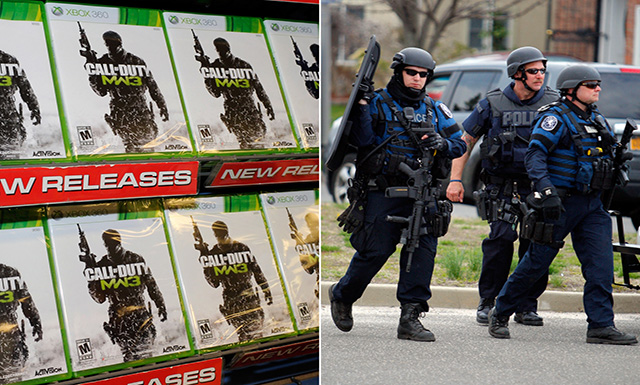 Police sent helicopters, fire trucks and more than 60 officers and elite forces into a two hour standoff at a home in New York after they got a call saying someone was going on a murderous rampage inside.

Police sent helicopters, fire trucks and more than 60 officers and elite forces into a two hour full emergency standoff at a home in New York after they got a call saying someone was going on a murderous rampage inside. It turned out the whole thing was a ploy for revenge by a gamer who the teen who lives at the address had just demolished online at Call of Duty.

The prank caller told police that he was Raphael Castillo, 17, and said “I just killed my mother and I might shoot more people”, then gave them Castillo’s home address.

When the police vehicles and choppers got to the address, they tried to coax Raphael out but he was still playing Call of Duty and couldn’t hear them through his headphones (so he says, hard to believe he wouldn’t have heard the racket outside). Instead his mum came running out of the kitchen trying to explain that she didn’t have a clue what they were on about. His brother drove up to the front of the house and he too had no clue what the cops were saying.

Police are now trying to track down the electronic footprint of the gamer who placed the hoax call. They reckon whoever it was figured out Castillo’s IP and was able to find his address that way.

I remember how devastating it was to lose at video games as a kid but this is outrageous. The most I ever did was pull out the plug or turn off the console right before I was about to lose, and that was considered taking it seriously. Calling the SWAT team on someone?? That is next level.