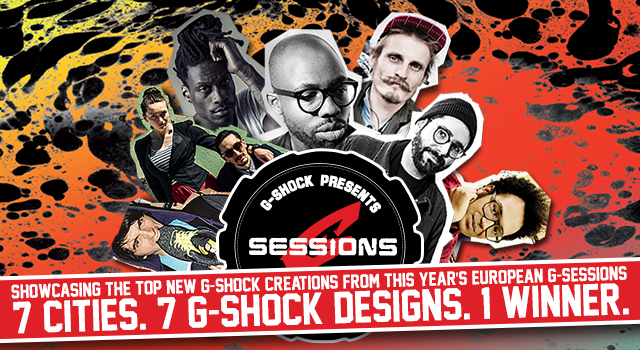 Be in with a chance to win VIP tickets to G-SHOCK’s G-SESSIONS final in Berlin, alongside 3 nights’ stay in the city and flights all taken care of. One of you has to win – all you have to do is enter.

Born at a time when watches were generally considered fragile instruments, G-SHOCK began as a dream of a young engineer who wanted to create “a watch that doesn’t break, even when dropped.” That engineer was Kikuo Ibe, CASIO’s Head of Watch Design at the time. Project team Tough was formed in 1981 with just three members to realise Ibe’s vision. They began their efforts targeting a ‘triple 10’ concept: 10-metre drop shock resistance, 10-bar water resistance and 10-year battery life.

G-SHOCK has followed a path of unique evolution ever since, while continuing to retain this basic inherited structure. Today as G-SHOCK prepares to celebrate its 30th anniversary, the tough, fiery spirit ignited by Ibe’s passion burns on, blazing even higher.

Earlier this year G-Shock selected a local creative ambassador in Milan, Barcelona, Paris, Amsterdam, St. Petersburg, London and Berlin who then, alongside a handpicked creative team, have embarked on a multidisciplinary collaborative project for the brand. The teams were given the task of producing an original G-SHOCK watch design along with the packaging and a presentation around it. With no rules or boundaries to the project and no limits to the chosen medium: whether illustration, street art, song or film, the creative piece remains completely up to the artist, resulting in a fantastically varied range of results.

Each project is available to view on the G-SESSIONS website and is being put to a public vote so head over to the site or download the G-SESSIONS Facebook App to vote. Each will be presented at the closing party for the G-SESSIONS project in Berlin on 28th November, where the winner will be announced to the team who receive the most votes. The successful model will be produced in a limited edition run next year.

Along with the culmination of this exciting project, the closing party will see an outstanding live music program from the likes of esteemed Hip Hop DJs Eskeji 83 and Stylewarz, and will be attended by G-SHOCK’s inventor Kikuo Ibe. G-SHOCK fans from each country can also be in with a chance to win VIP tickets to the final event, alongside 3 nights’ stay in Berlin and flights by simply registering on the G-SESSIONS site.

All you need to do to enter is sign up for the newsletter over at G-Sessions. One of you has to win – so take 30 seconds to sign up and you could have an awesome break in Berlin attending the G-SHOCK festivities and being given the VIP Treatment. Get on it now.