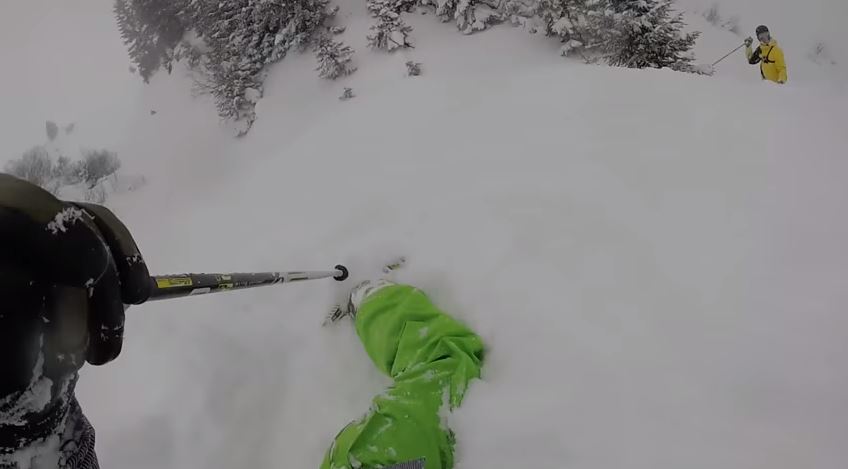 This is absolutely terrifying.

This doesn’t seem too serious until you realise how deep this guy was buried and how easily he could have died if his mates didn’t find him in time.  Absolutely terrifying:

James — the guy who almost died — wrote this blog describing the moments before he was rescued and it sounds like the absolute WORST:

As the snow piled higher and higher, It became darker and darker until I was surrounded by an eerie black silence, broken only by the sound of my slow breathing and racing heartbeat. “Okay” I thought to myself; “You’re dead.” I had a shovel and probe in my backpack and I was wearing a transceiver, however, the others were only carrying a shovel and probe. I was convinced that they would not find me in time. Unable to move I focused on slowing my breathing, relaxing and conserving oxygen. I felt bizarrely emotionless and wondered for a moment what death would be like. Then I remembered that I was reaching upwards with my left arm, ski pole still attached. I tried to wiggle my hand and I felt a ‘pop’ as the top 5cm of the pole broke the surface of the snow. Suddenly emotion flooded through me as I realised that Andrew, Dan and Leonard would be able to locate me under the snow if they saw the tip of the pole. However I still forced myself to remain calm as I sat in wait.

He owes his mates his life for this one, though he’d have been a complete badass if he rescued himself the way this construction worker did when the house he was working on caught on fire.