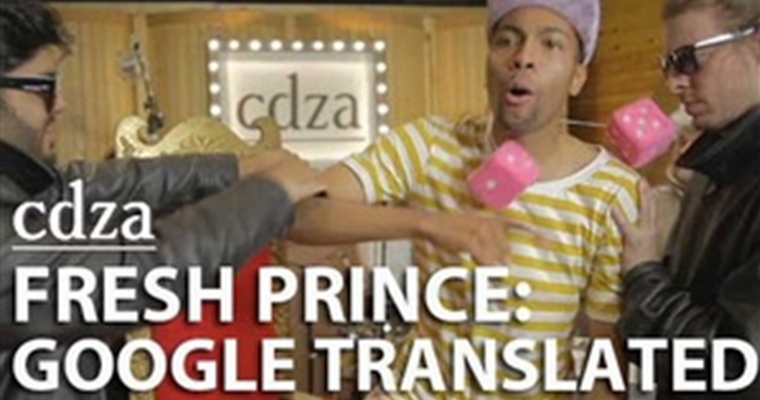 If you have time on your hands, why not put the Fresh Prince theme tune through all of the languages in Google translator and then perform it live?

I got showed this video today by one of my mates who enjoys a good geek out as much as I do, maybe even more. Basically a bunch of guys have put the lyrics for the world famous theme tune for the Fresh Prince of Bel-Air through Google translator and then get a rapper to perform it in it’s new format. If you’ve not used Google Translator before it’s pretty much joke attacks. I mean, it is very clever, but because languages are so weird and complex it’s easy to fool about with. I’ll do you a demo.

Lets take this random sentence: ‘Lazer Horse worships at the magnificent alter of Sick Chirpse and so should you maggot farmers’

Translated back into English: ‘Lazer loves riding in the magnificent altar Chirpse sick and so should you worm farmers’

And finally back to English again: ‘Laser loves horses in Chirpse altar wonderful patients and farmers so you should worm’

So these video guys are called CDZA and they do musical video experiments. They pass the lyrics to the theme song through more and more translations until they cover every language in Google translator. The general, vague meaning kind of stays put, but what makes the video an impressive win for me is that the main rapper chap manages to make all of the versions sound pretty natural. I enjoyed it more than I thought I would. Right, I’m off to play with Google Translator. You watch this.