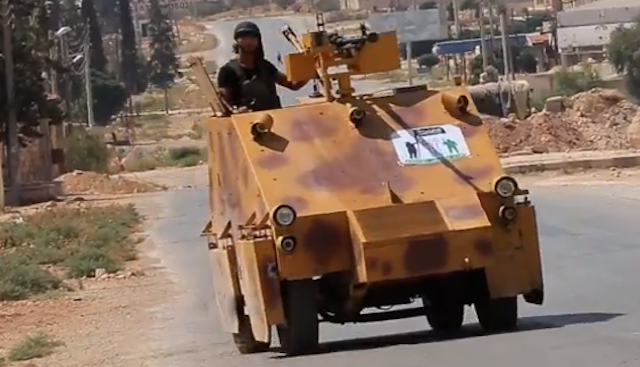 There’s a long tradition of protestors making homemade weapons to carry out their protests – check out these home made weapons from the Ukrainian riots earlier this year for example – and it’s no different over in Syria withe Free Syrian Army.

They’re so desperate of weaponry that they really had to use what was at their disposal to build a tank. They grabbed a pickup truck, some scrap metal, a 50 calibre machine gun and a Playstation controller and came up with one of the most ingenious contraptions ever seen. It kind of reminds me of when The A-Team get trapped somewhere and have to make something sick out of whatever is at their disposal to get out of there.

The FSA use this device to fight both ISSI and the Assad regime and take you through how it works in the demo below, telling you what to do if an enemy attacks or you accidentally drive into a wall. Hopefully with weapons like this they’ll manage to out smart and destroy ISIS, even if it takes a little help from Task Force Black – the Navy Seal and SAS unit formed deliberately to take them down.