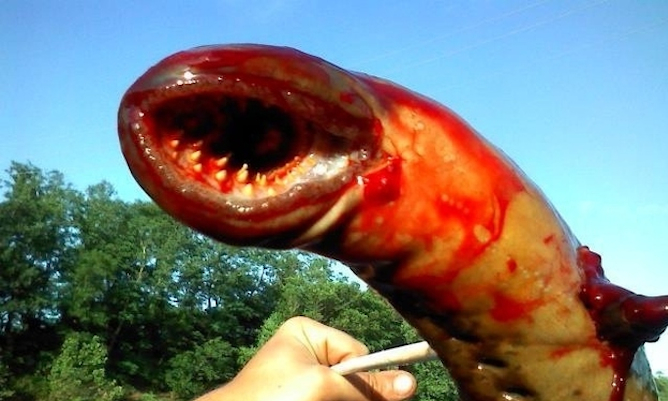 Look at that thing! That is some scary scary shit. It’s a good thing that dude put an arrow through otherwise I would be going nuts every time I even went near a river in New Jersey. Which would hopefully be never in the first place. 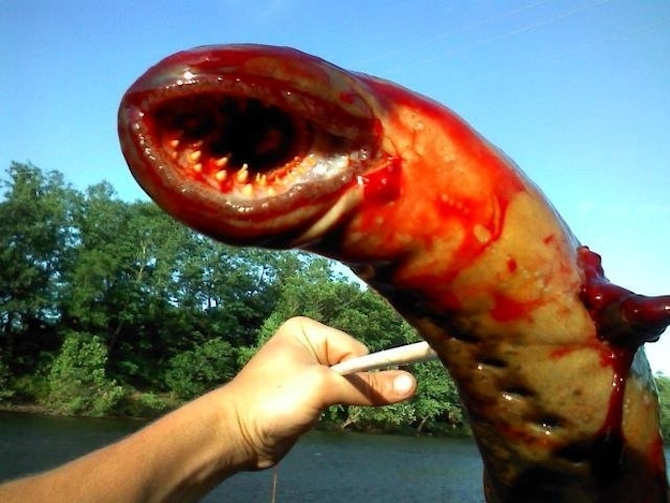 This is freaky. And actually kinda scary. I mean what the hell is that thing? It went up on reddit a couple of days ago and has amassed well over a million views since then. The story goes that some dude called Doug Cutler was fishing in the Raritan River in New Jersey a couple of summers ago (this already sounds gross, I mean New Jersey ewwwwwwww) when he spotted this creature. For some reason this guy Doug Cutler was fishing with a bow and arrow, which turned out to be pretty lucky as I doubt he would have been able to capture it with a regular fishing rod. I’m not a fisherman but is it normal to fish with a bow and arrow!? Anyway, it looks as if he fired an arrow straight through it, or just mounted on an arrow after he caught it to look tough, and there you have it. What in the name of God is this horrible looking creature?

It reminds me of that creature from the X Files at the start of season 2 in an episode called The Host. I don’t know if you’ve seen that one but I always remember it because it was one of the first episodes of the X Files I ever saw and I was like 9 or something and it scared the absolute shit out of me. There was basically some weird mutant parasite/tapeworm living in the sewers going around sucking the life out of everyone. It was super scary. Here’s a picture of that motherfucker. Similar look huh? 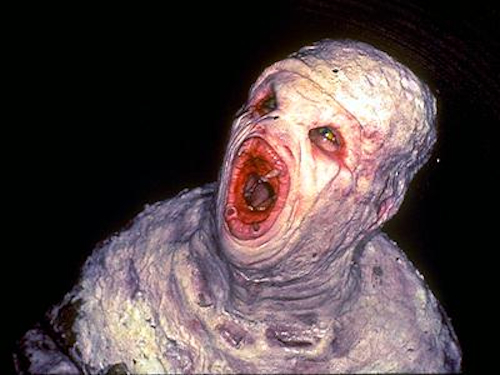 With this though nobody really knows what it actually is, although there have been a few guesses from all those geeky redditors. The leading theory is that it’s a giant sea lamprey which is some kind of sea parasite that sounds pretty horrific – and kind of like The Host – and is generally pretty scary even when it isn’t giant. These lampreys are generally found in the North Atlantic, and prey on their victims by using their horrible teeth to latch onto their victims – either fish or humans – to inject them with digestive fluids which slowly eat away at them until they’re dead. I guess after that they eat it. Completely gross. Only one out of seven survive the attack and yeah, that’s counting fish AND humans. Scary shit. Apparently they’re migrating from the Atlantic to places like the Great Lakes and rivers in New Jersey, so you know maybe think twice before you go skinny dipping in one of those spots again.

Having said that though, not everyone is convinced that the creature is a giant sea lamprey, with many so called experts still debating its origins and arguing that it could be something even grosser, maybe like a real version of The Host. A New York Department of Environmental Conservation spokeswoman stated that: ‘the photo doesn’t allow counting of gill openings (seven per side for sea lampreys), but based on size alone, this does appear to be a sea lamprey,” which obviously makes you questions whether or not it’s a sea lamprey. Scary stuff. What do you think it is? Other than gross and terrifying of course.