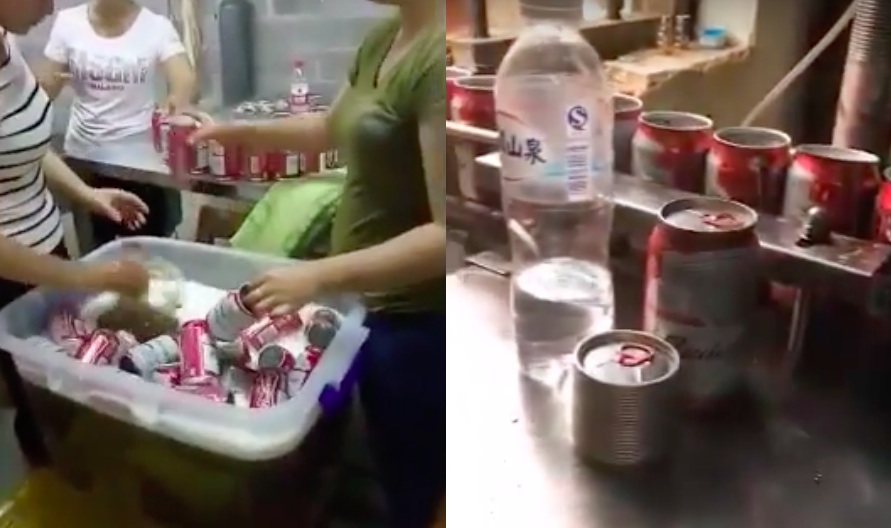 You’ll never drink a can again.

Despite the fact I drink beers all the time, I’ve never really considered the process by which the liquid is placed into a bottle or a can – I really haven’t thought about it at all. And it looks like that might be a good thing, as the video below kinda makes me want to puke. The leaked footage shows how some factory workers are making ‘fake’ Budweiser over in China.

I dread to think what watered down crap they’re using as Bud replacement. But the main concern here is the fact that the beer is in some gross looking vat and the cans are filled up by literally dunking them in it and scooping it up. Absolutely rank:

Oh man is that gross. Thankfully, the factory – which was located in Dongguan, an area in Guangzhou – has been raided by the police and shut down now. But it was estimated that it would pump out 600,000 cans of that crap every month, which it would sell to nightclubs and bars.

However, this isn’t the first time that a fake beer factory has been shut down in China, so it seems inevitable that some other ones would be operating as well. I just wouldn’t drink Budweiser if you’re planning on visiting China any time soon, just to keep it on the safe side.

For more Budweiser, check out this dumb story about a guy called Bud Weisser breaking into a Budweiser brewery. You couldn’t make it up.