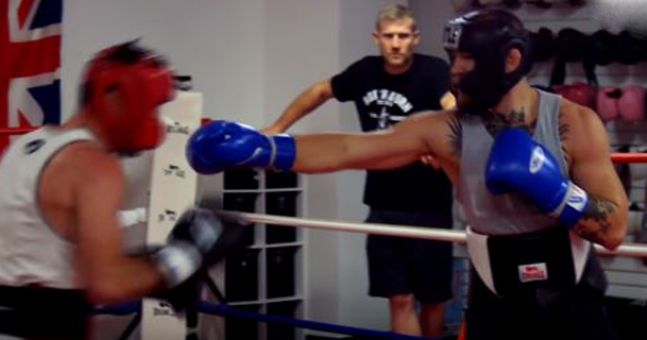 I bet Floyd Mayweather is loving this.

In case you’ve been living under a rock, then you’ve probably heard that the Conor McGregor – Floyd Mayweather fight has finally been booked and will be taking place in Las Vegas on August 26th of this year.

Of course, the whole thing is a bit ridiculous in the fact that Conor McGregor has never competed in a boxing match in his life and essentially the biggest fight of all time is going to feature a boxer making his professional debut, but unfortunately that’s just the way the world seems to be going in 2017. The fact that it’s even happening though does beg the question – could Conor McGregor have what it takes to knock Floyd Mayweather out?

It’s certainly possible, but highly unlikely and this boxing footage leaked by his former sparring partner Chris van Heerden won’t exactly encourage anyone to think that this result might actually occur in reality. Van Heerden is a former IBO and IBF welterweight champion that Conor drafted in to help him with his boxing training when it turned out that the fight with Mayweather might actually be a possibility. This video doesn’t make McGregor look all that though:

People telling me Mayweather will have his hands full trying to land on McGregor -STOP IT! I respect McGregor BUT i ain't Floyd and i landed pic.twitter.com/gd4dFi3XUU

Yeah, I mean he’s keen to say he respects Conor but he’s right – he isn’t Floyd Mayweather and he’s landing a bunch of punches there. Mayweather punches at around the force of Nate Diaz too (about 814lbs) and we all know what happened the first time one of Nate’s punches connected with Conor. Just saying.

Still, it’s not a foregone conclusion and I’m sure we’re all going to tune in come August 26th. Gonna be one for the ages.

Here’s some footage from Conor’s first ever MMA fight to get you in the mood. Still a scrapper back then.