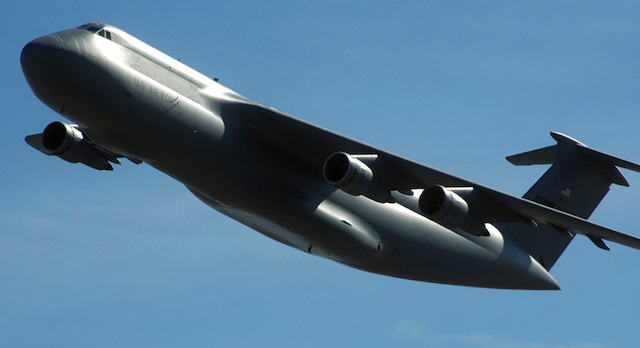 A C5 galaxy is an absolute monster of an aircraft with the third largest lift capacity in the world and able to carry 122 tons worth of material. Let’s put that in perspective.

The C5 Galaxy – or the Lockheed C-5 Galaxy if you want to give it its full name has the largest lift capacity of any US transport aircraft, and the third largest lift capacity in the entire world. In layman’s terms that basically means it can carry a fuckload of weight before it crashes because it’s too heavy and getting weighed down.

Its capacity is 122 tons which is spread over two decks – the lower one for cargo and the upper one has seating for up to 73 passengers, although I can’t really imagine why so many people would be travelling on such a plane, unless they were transporting prisoners or something. I only say that though because it kind of looks like the plane from Con Air.

In any case it’s fucking huge, although it’s kind of hard to illustrate that just by looking at a picture of it -so with that in mind let’s take a look at what can actually fit inside it. Get a load of these, although we’ll start just with a nice diagram of it so you get the idea of what goes where (that’s what she said).