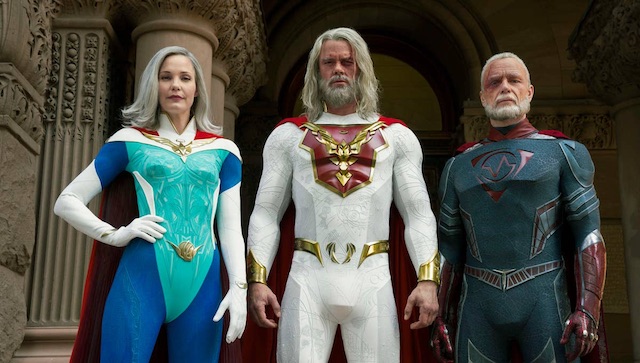 Here’s your next superhero obsession.

These days it seems like there’s a new must watch superhero series/movie that comes out every other week and the latest one to add to this collection is Netflix’s new epic ‘Jupiter’s Legacy’.

The show comes from visionary comics creator Mark Millar – the man behind both ‘Kickass’ and ‘Kingmsan’ – and looks like it’s going to be a lot of fun, telling the story of the second generation of superheroes struggling to live up the achievements of their parents. Here’s the trailer as well as a little synopsis:

After nearly a century of keeping mankind safe, the world’s first generation of superheroes must look to their children to continue the legacy.

But tensions rise as the young superheroes, hungry to prove their worth, struggle to live up to their parents’ legendary public reputations — and exacting personal standards.

Yeah I dunno about you, but that just kinda looks like a retconned version of ‘Watchmen’ to me. Maybe if it had come out a couple of years ago I might have been a bit more excited about it, but it really does seem like there’s way too much superhero stuff (‘Umbrella Academy’, ‘The Boys’, everything from Marvel and probably a bunch more that I can’t remember right now) coming out every other week that it’s all getting a bit too samey for my liking?

Having said that I’ve read the comic book and that was pretty good, so I’ll probably be tuning into this in about a month and raving about how good it is. I guess you gotta give it to them: they do tend to be making these superhero shows pretty damn well.

For more of the same, check out the first trailer for the new ‘Suicide Squad’ movie out this summer. That kinda looks OK I suppose.