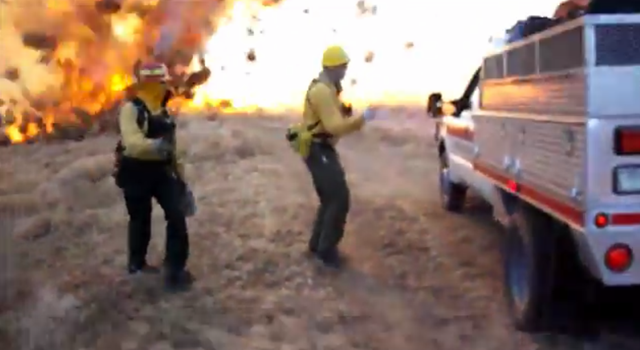 Fire + tornado = firenado! This bad boy was caught on camera last week, it looks like a porthole to hell was ripped open in Colorado…

The following video was shot in Rocky Mountain Arsenal, Adams County, Colorado last week and shows two fairly benign phenomena combining to make one impressively sinister looking event. The US Fish and Wildlife Service and the US Forest Service were carrying out the routine burn of an area of scrub land, they often orchestrate controlled burns to help prevent bigger fires spreading.

As they were watching this planned fire a dust devil started up. Dust devils are like mini-tornadoes but they normally don’t cause too much of a fuss, they’re not particularly powerful. But when the two things combine you get what looks like a porthole from hell opening up: a fire tornado or firenado if you will… 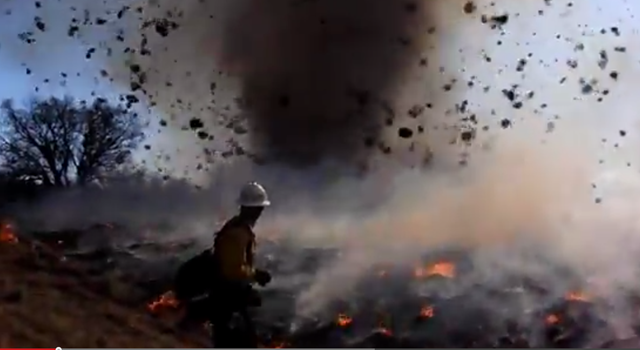 The video is kind of otherworldly. I don’t know why the firemen don’t seem that bothered by it. I mean there’s a swirling fire in the sky and they’re just watching and filming it? I’d be running. It looks like the Event Horizon has invited you on a trip straight to Hades, and the invitation isn’t optional. This one is just a baby though, during the 2003 Canberra bushfires, a fire tornado with a diameter of nearly 500 metres with horizontal winds exceeding 250 kilometres per hour was documented. They wouldn’t have just sat around and watched that I bet.

At the 3 minute mark it looks like the beast is chilling out but then the windy demon wanders off to the next field and carries the fire with it. They were supposed to be burning about 150 acres of land but I guess the lord of the flames had other ideas.

Four fire crews:  South Metro Fire, West Metro Fire, Denver Fire and Fairmount Fire were all involved according to the credits of the film but it seems like they just stood about and watched it rather than firing any water at it. Maybe they were just pleased it was spreading the fire about on their behalf so they didn’t have to bother? 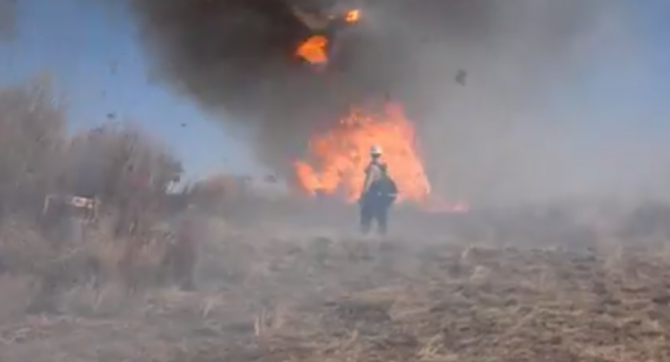 I love the way the smoldering shrubbery floats about in slow-mo: