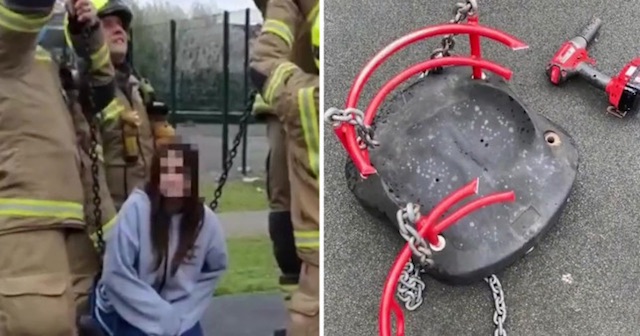 People are so weird.

I wrote just now about how we haven’t had a good social media challenge for a while and what do you know here’s another one, as people in this country are now trying to squeeze into toddler’s swings and get themselves stuck in them and be rescued by the fire brigade in an attempt to go viral on TikTok. This country hey?

The problem has become so severe that the London Fire Brigade are apparently wasting so much time with calls from people getting stuck in these swings and ringing them up to come and rescue them that they’ve taken the unusual step of putting out a press release begging people to stop trying to get stuck in them. They’re claiming that they’ve been called out to deal with over 100 people trapped in toddler’s swings over the last couple of years, with 21 of the incidents happening in 2021.

Here’s what the brigade’s assistant commissioner Jane Philpott said about the new trend:

Our firefighters attend a wide variety of challenging incidents and far be it from us to judge the precarious positions some people find themselves in.

But in their quest for TikTok fame, people have been potentially diverting our crews from more serious incidents and that isn’t something we want to see.

Each job our firefighters do attend takes time and we are hoping to prevent further call outs to such incidents by issuing this warning.

We would ask people to please just think twice before taking part in this challenge – think of the injuries you could cause yourself, the damage to the swings which have to be cut apart and most of all the fact you’re tying up resources which could be needed for a genuine emergency.

It might be a fun story for your friends, but wasting the time of emergency services is serious.

Yeah, I gotta be a boring old fart here and say that I actively agree with what she’s saying there and don’t think it’s very cool that people are deliberately getting trapped in swings so that the fire service have to cut them out. I can’t even comprehend why anyone would think that was a cool video to put on their social media and imagine that it would just have been really embarrassing if I had done that when I was a teenager? I guess I’m out of touch.

Anyway, if you’re a 14 year old kid planning on doing this at the weekend, do everyone a favour and don’t. You’ll only regret it in the future.

For more of the same, check out this scary social media challenge they called ‘the 48 hour challenge’. Very sinister.