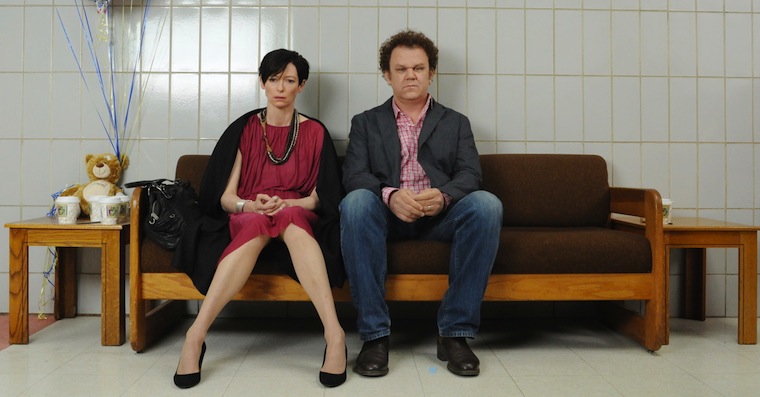 Lynne Ramsay takes on the difficult task of adapting Lionel Shriver’s novel about a high school killer for the big screen.

“I blame the parents”. It’s the stock response to Columbine style acts of pent up “misunderstood” teenage angst which result in the senseless slaughter of high school kids across Middle America. Over the last couple of decades these high school shootings have become so disturbingly commonplace that they represent an almost clichÃ©d response to the hardships of hormonal development. But in every incident young, promising lives are lost, in every atrocity another mother is blamed. Each one of these acts of violence has its own Kevin Khatchadourian. The title character of Lionel Shriver’s (who weirdly is a woman…called Lionel) pulsating, provocative and deeply unsettling novel is brought to life in Lynne Ramsay’s We Need to Talk About Kevin.

Eva Khatchadourian (Tilda Swinton) is a successful travel writer who thanks to her collection of student travel guides has amassed a small fortune. When she meets the love of her life, Franklin (John C. Reilly) she reluctantly decides to become a mother. When Kevin (Ezra Miller) is brought into the world it spells the end of Eva’s happy, carefree existence and the beginning of a lifelong struggle to understand her son (a detatched, emotionless pissy little emo prick) a struggle that will eventually culminate in Kevin’s unspeakable atrocity; the killing of seven students and two members of staff in his high school gym a few days before his sixteenth birthday. The film focuses on the relationship between Eva and her son over the course of his life and acts as a hard hitting case study for the nature versus nurture debate. 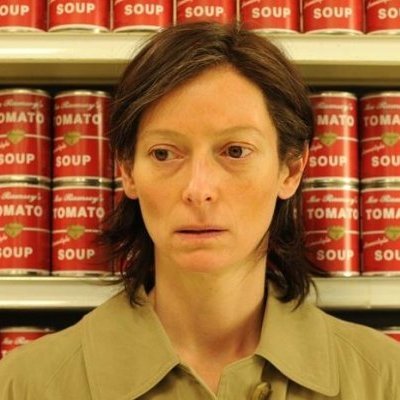 "Excuse me, do you have any soup?"- Tilda Swinton excels as Kevin's mother

The first big decision made by Lynne Ramsay in her adaptation of Lionel Shriver’s novel seems to have been to abandon the book’s first person narration, which takes the form of a series of letters written by Eva to her now estranged husband Franklin. Ramsay instead chooses to present Eva’s story as a series of flashes through time, flitting between the story of Kevin’s upbringing and Eva’s life as the mother of a renowned killer. The result of this decision is that while the film perfectly captures Eva’s transformation from a confident businesswoman to a weak, retiring shell of her former self (thanks mostly to an outstanding performance from the ever reliable Tilda Swinton) it sometimes lacks the novel’s strong focus and a deeper insight into what Eva is feeling at any point in the story. For a story brimming with controversial discussion points it is surprising to note how much artistic flair Ramsay injects into the film; using music, light and spacing to create some wonderful imagery with remarkably little dialogue. At times this works perfectly, such as in the opening sequence in which Eva recalls glorious globe-trotting she experienced in the pre-Kevin years, however it also has the drawback of meaning several of the most important aspects of the novel are missed out and an understanding of Eva and Kevin’s relationship is harder to come by. At times the artistic revelry also borders on recalling Terrance Malick’s abysmal Tree of Life, and no-one of sound mind wants that.

Despite the film’s failure to fully get to grips with the superb source material it does nail the aspect which is most important; the troubled relationship between Eva and Kevin. Everyone knows how talented Tilda Swinton is so there was never any real concern that she would play the part of Eva with anything less than perfection, but Ezra Miller was an unknown quantity heading into the film, and what a discovery he turns out to be. He manages not only to get into the mind-set of Kevin Khatchadourian, a thoroughly unlikeable character, but he translates the physical description of the character from the book with great care and skill. Miller manages to pull off Kevin’s crooked half smile, his languid, floppy movements and surprisingly graceful poise as well as capturing his fury, his cockiness and the undercurrent of deep uncertainty that suggests his exterior posing is nothing more than an elaborate act. The film’s most successful scenes involve the interplay between Miller and Swinton, who create an unsettling portrait of what can happen when a child just doesn’t get on with his mother. 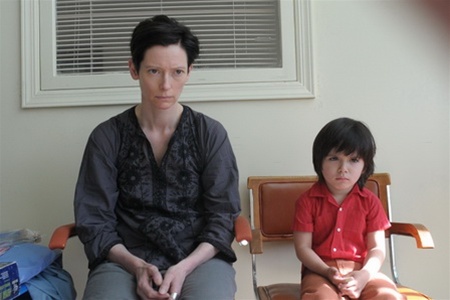 Can't you feel the love?- Eva and Kevin's relationship was strained from the beginning

While Ramsay’s film captures the essence of the relationship between Eva and Kevin it fails to delve deeper into the killer’s psyche by exploring the equally important relationship between Kevin and his father, and several key scenes are omitted which would have helped the film’s audience understand what makes Kevin’s view of his mother so interesting, he may hate her, but possibly less than he hates anyone else. Essentially the best advice I can offer is a bit of a clichÃ©; don’t read the book first and you won’t be disappointed. The drawbacks I have mentioned stem from the fact that I was looking forward to the film so much on account of having read the book. Viewers who see We Need to Talk About Kevin without reading the book will be treated to a dark, unsettling, artistic and outstandingly performed film which raises a lot of interesting questions about parenthood, even if it makes no real attempt to find answers.