With The Avengers less than a year away the final crew member is introduced, can Chris Evans pull it off as Captain America?

Duh duh duh duh duh duh duh AMERICA! FUCK YEAH! That’s right people, seventy years since he was first spotted kicking Nazi ass in comic books serving as blatant World War II propaganda, Captain America finally makes his mark on the silver screen in Captain America: The First Avenger. As the title would suggest the film is not only Marvel’s marquee release of the summer, but is the final individual film leading up to 2012’s The Avengers. Although Captain A follows The Incredible Hulk, the Iron Man movies and Thor in terms of release order, he gets the title of first due to the film’s historical setting, which journeys back to the 1940s and presents Steve Rogers’ story as it was in the comic books. With The Avengers set for a May 2012 release there is a lot of pressure on director Joe Johnston to follow the financial and relative critical success of his predecessors and assure that Captain America is as important a member of the super crew as those who came before him…or after him, depending on how you look at it.

Steve Rogers (Chris Evans) is a scrawny little kid from Brooklyn who wants nothing more than to join the US army and do his bit for his country in the war effort. Trouble is, with his fragile frame and poor bill of health he gets knocked back every time he tries to sign up. Eventually Steve’s perseverance pays off and he is given a chance by Dr. Abraham Erskine (Stanley Tucci) to be part of a new division of the army and is put forward as the ideal candidate to become a genetically enhanced super-solider using the power of a serum invented by Erskine. Meanwhile Hitler’s head of advanced weaponry Johann Schmidt (Hugo Weaving) is making his way across Europe in search of the Tesseract, a mythical cube which will grant him the power of the Gods. Schmidt wants to step out of Hitler’s shadow and plans to use the Terresact in order to secure world domination for his terrorist group HYDRA. With Steve Rogers now a fully-fledged ass kicking machine known as Captain America it is up to him to stop Schmidt and save the world. 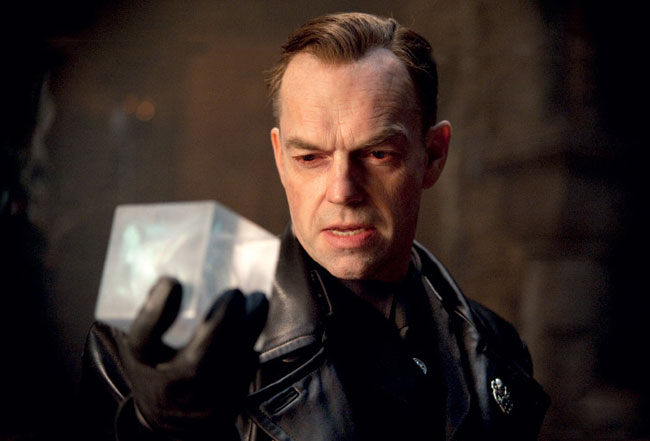 "BOOOOOO"- Hugo Weaving hams it up as baddie Johann Schmidt

It’s always comforting to know that there’s a company you can rely on when it comes to big budget action adventure, and currently that seems to be Marvel. Unlike DC’s erratic movie output which ranges from the sublime Dark Knight to the ridiculous Green Lantern, the last few years have seen a solid run from Marvel, just as well when you’re planning the biggest superhero collaboration movie of all time in just a few short months. What is interesting about the films leading up to The Avengers is that, rather than simply being transitional movies used to introduce the characters and move swiftly on, each director has been able to bring some personality to each film. This can be seen in the boys-with-toys, rock n’ roll fun of Jon Favreau’s Iron Man films or the thespian bluster of Kenneth Branagh’s Thor. In Captain America’s case it is the spirit of adventure films such as Raiders of the Lost Ark, which Johnston himself worked on, which is channelled and the tone works perfectly in the lovingly recreated 1940s setting.

War time New York is brought to life superbly, and immediately we become absorbed into a fascinating visual world, aided by the use of 3D which Marvel seem to have mastered more than most, creating sequences which only rarely pop out of the screen but create a wonderful depth of field, drawing out the best of the action sequences as well as Hayley Atwell’s awesome boobage in her role as love interest Peggy Carter. As well as being exciting and captivating the visuals also help to reiterate the tone of the movie, one which embraces its status as a comic book movie rather than trying to fit more realistically into a world we can relate to. This at times means that our disbelief requires a hell of a lot of suspending, but if viewers can manage this it makes the whole experience far more rewarding. 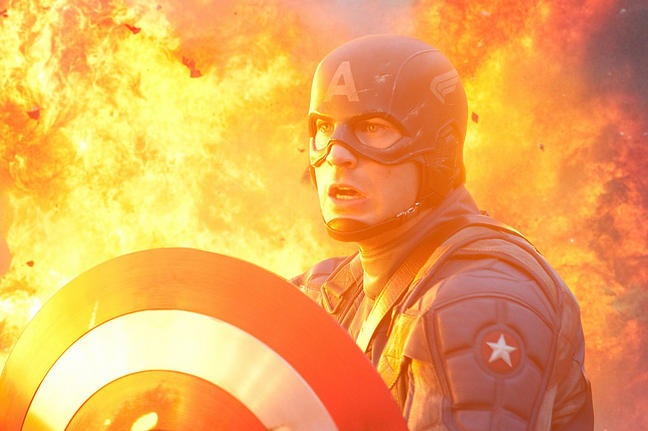 "Bit of a badass"- Evans rocks the action scenes

Captain America has a solid cast to back up its impressive look and feel, with stellar support from Tommy Lee Jones as Col. Chester Phillips and Hugo Weaving as the aforementioned Schmidt. But it is Chris Evans who continues to impress in the title role, his chiselled features and bulging muscles perfectly suiting the action scenes and his charisma and acting talent ensuring Captain America comes across as an old fashioned gentleman as well as a bit of a badass.

Of course there’s fun to be had in the American ideals which suggest the little man can make it big, providing he gets a serum that makes him super strong, and the final battle is a little anticlimactic. However, overall Johnston has succeeded in making Captain America: The First Avenger a film which acts as an introduction to the character and also functions as a complete, exhilarating and surprisingly emotional superhero movie in its ownright, one which completes the job of previous films of thoroughly whetting the appetite for The Avengers.

P.S. stick around until after the credits for a sneak peak of The Avengers.