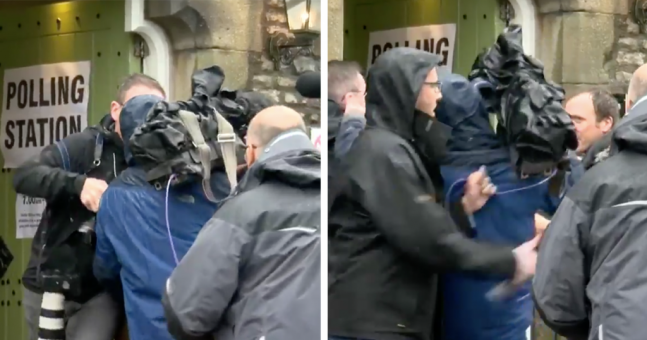 Everybody should be heading to their polling station today to cast their vote in the general election, and I would like to think that no matter what their political persuasion, that everyone would be able to get along at the polling booth and no violence would occur – that’s the meaning of democracy after all right?

Unfortunately, although this attitude may exist amongst the electorate, it doesn’t seem to be transmitted throughout the media, as a massive scrap erupted between some cameramen in Cumbria. The guys were jostling to get the best shot of Liberal Democrat leader Tim Farron coming out of the station after casting his vote, but unfortunately their jostling for position turned into a fully fledged scrap, with one of them ending up on the floor.

Make sure you have the sound turned up too for some absolutely excellent commentary from some posh woman who can’t believe what’s going on:

What a complete and utter joke. Kinda sums up media coverage of the entire general election. Hope the guy that got pushed to the ground is OK.

Can’t wait to see the video and photos of Tim Farron walking out of the polling station too. I’m sure those shots are going to be worth all the traffic and views that those videos and photos are going to generate. Absolutely certain.

For more cameramen fights, check out Justin Bieber attacking a member of the paparazzi. Remember when that happened?