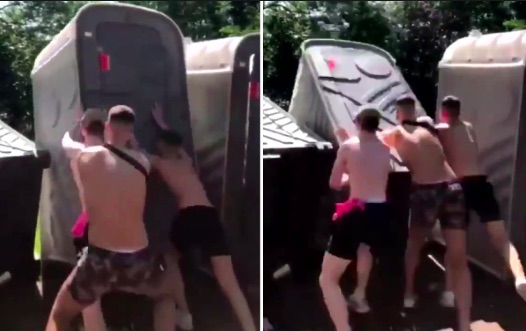 We’ve got another instant Karma video for you today, this time in the form of a guy who did the absolute unthinkable… he jumped the queue. Not. Cool.

To make matters worse, it wasn’t just your ordinary queue – it was while waiting in line for the loo at a festival.

It wasn’t long until he got his comeuppance, as a group of lads at the TRNSMT festival in Glasgow were on hand to serve justice in the most brutal way possible, by tipping over the portaloo while he was still in it.

The c**t came out covered in shite.

It paints quite a picture, doesn’t it?

Unfortunately we don’t actually get to see the aftermath, but anyone who’s ever been to a festival will know how truly and utterly grim it must’ve been. Hundreds of people’s pill poops and dehydrated piss covering him in one fell swoop – safe to say this guy won’t be cutting the queue again any time soon.

For the music festival that managed to hold a rave inside one of its filthy portaloos, click HERE.