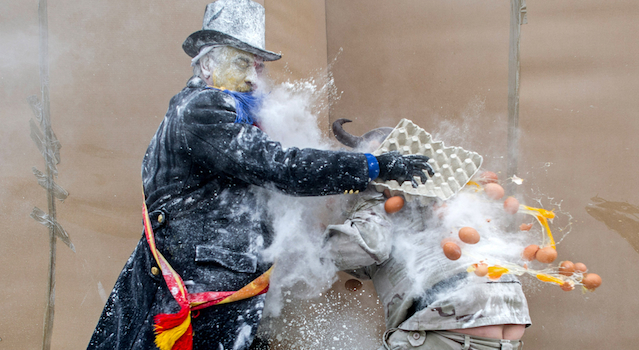 Two sets of random gangs go at it for a day with flour, eggs and firecrackers as their weapons to save the soul of the village of Ibi.

The festival of Els Enfanirats in the Spanish village of Ibi is a 200 year old festival that involves the participants pretty much just pelting each other with flour, eggs and firecrackers for the whole day, which sounds like a complete and utter blast.

The battle is between two rival groups – ‘Els Enfarinats’ and ‘La Oposicio’. Els Enfarinats are a group of married men who for some reason take over the village for a day and create a list of ridiculous laws that incur fines. On the flipside of this La Oposico try to restore order to the town, presumably by throwing flour, eggs and firecrackers at Els Enfarinats.

At the end of the day all of the money taken from the fines is donated to charitable causes around the village, so everybody has a blast and it’s for charity, although the whole thing looks completely weird. But also awesome at the same time.