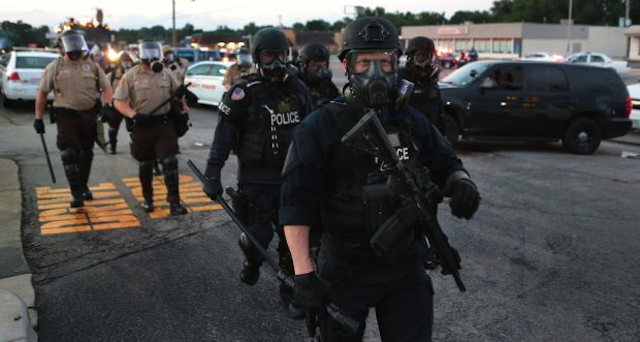 You’ve probably heard about the Michael Brown controversy over in Ferguson, Missouri but things reached a new low last night when the cops there opened up fire on unarmed civilians and attacked news trucks. The place is going to hell.

If you don’t know what’s up, then here’s a quick recap: basically over the weekend cops in Ferguson shot and killed an unarmed black man named Michael Brown for pretty much no reason, and since then the town of roughly 21,000 people has been actively protesting against its police force. News coverage on site was pretty thorough until yesterday when there was a sudden blackout as many journalists began to be obstructed from entering the town and reporting on events there and even in some cases being arrested.

This includes Huffington Post reporter Ryan Reilly and Washington Post reporter Wesley Lowery, who were working in a McDonalds when it was raided by a SWAT team – which is almost as bad as what happened to McDonalds when this woman was denied her chicken nuggets. Both Reilly and Lowery were arrested and assaulted when they tried to take a picture of the policemen because ‘they didn’t want witnesses’.

This was also true of a live stream showing events in the city that captured policemen firing rubber bullets on protesters full of unarmed citizens who were commanded to not take any pictures. When they refused, the cops opened fire on them.

Events got more and more tense during the night as the police fired more rubber bullets and tear gas at these unarmed protestors. They shuffled them into a residential neighbourhood and continued to fir rubber bullets at them without regard for any of the residents’ safety or property. Ferguson has also been declared a no fly zone  and police threw tear gas at an Al Jazeera van that was trying to set up a live stream after the original one went down.

Basically, Ferguson has turned into a police state over night just because the police killed someone they 100% shouldn’t have and now when people protest against them about it, instead of fessing up and being held accountable, they decide to crush anyone who questions them, be they a citizen or a journalist coming in to report it.

Clear and transparent democracy my ass. Obviously this situation is developing and more stuff will be going down in the coming hours but needless to say, it doesn’t exactly look good when America spends most of its time allegedly trying to help other countries develop from societies that treat their people like this.