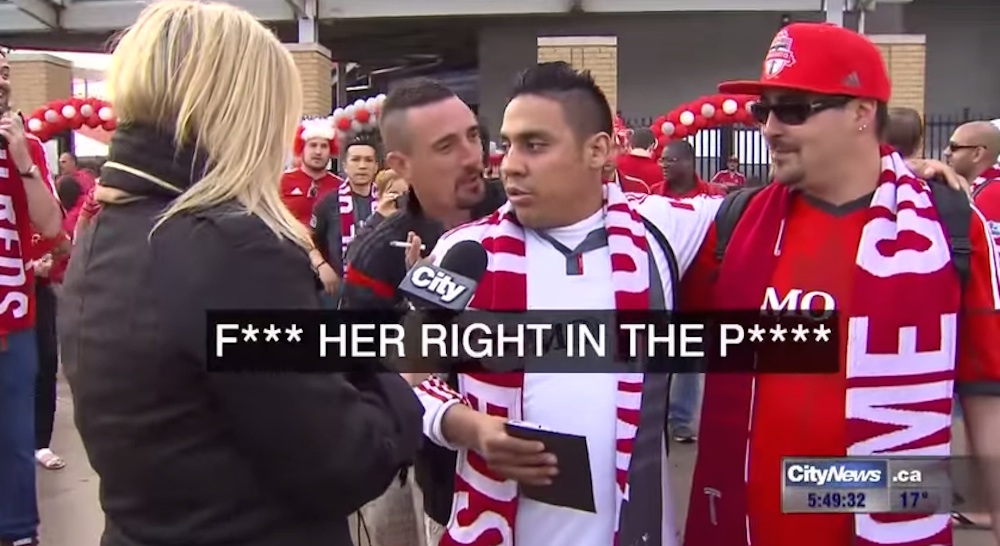 Why hasn’t this happened sooner?

The whole FHRITP meme was funny for a bit – we’re not gonna lie and we were guilty as anyone of posting up enough of the videos – but by this point it really has run its course and there isn’t really anything anyone can do to make it original and/or funny again. It’s kind of like the last few seasons of Scrubs in that respect.

That’s why this next clip is so great, as a news reporter from Toronto named Shauna Hunt actually stands up to the guys perpetrating the offence and asks them if they think it’s funny, whilst also explaining that it’s degrading and disrespectful to women. To be honest it’s surprising that it’s taken so long for something like this to happen at all.

The men she’s interviewing – who are Toronto FC and Arsenal fans respectively, exiting a recent game at the BMO Field in Toronto where they just lost 2-1 to the Houston Dynamo – don’t do themselves any favours and come across as drunk idiots not willing to listen to anyone else and desperately trying to justify their sexism as mothers. I bet your mothers won’t actually think it’s hilarious when they see you on this video guys, because it’s going viral and it’s only a matter of time before you’re identified and everyone you know feels a bit embarrassed to be associated with you.

It probably is time to put FHRITP to bed now after this, although to be honest it’s kind of surprising it’s even going on anymore at all. We haven’t mentioned it since last September and that was for a special drive by assault version – just doing it in a crowd isn’t interesting or funny anymore and probably wasn’t really that amusing in the first place anyway looking back on it.