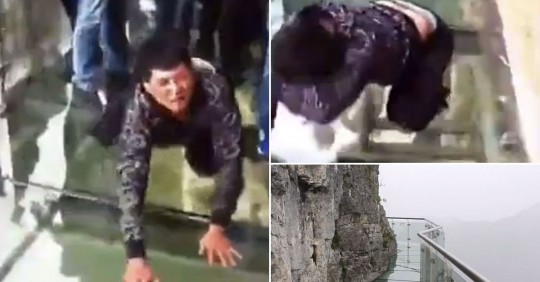 This guy deserves your respect.

The glass walkway that wraps around Tianmen Mountain in Zhangjiajie, China is 4,700 ft up in the air and offers tremendous views of the land around and below.

Kind of hard to appreciate though when you suffer from a crippling fear of heights like this dude.

Respect to the guy for giving it a go, I suppose. Can’t have been easy trying to focus on the task at hand while going into meltdown with a bunch of Chinese guys and gals all cracking up laughing at you. Not to mention all the people recording you as well. This guy actually went for it despite his fears and… well, he did terribly but that’s not the point. The point is he tried. The fact he failed miserably is neither up nor down.

Something tells me he won’t be watching Jake Gyllenhaal’s ‘Everest’ when it drops.