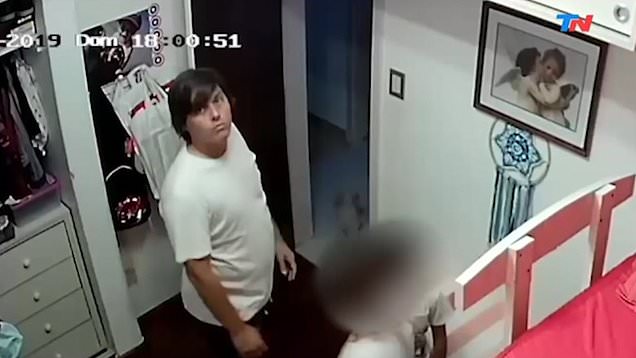 The parents of a 12-year-old girl saw her being abused by a family relative after installing CCTV cameras in her bedroom.

The girl had previously told a school friend that Leandro Sebastian Martinez, 41, had touched her sexually. The friend told her mum, who told the girl’s parents who then discussed it with their daughter and took her to a child psychologist.

Instead of taking instant action the family decided to set up cameras in the girl’s bedroom in Buenos Aires, Argentina, so they could get evidence of the abuse.

Bit of a controversial tactic, but it worked:

When we saw that the videos proved what our daughter told us was true, we went crazy.

My daughter was a flower girl at his wedding. We look after our children but our worst enemy was there half a metre from us.

Annoyingly, Leandro did not get his just desserts because as you see from the clip he spotted the camera and must have put 2 + 2 together and has now gone on the run.

It’s pretty awful that the girl’s parents let her get abused again just so they could catch it all on film. I’m sure it was a hard decision since they had no evidence to actually nail him with but it’s still a bit disturbing. What I don’t get is how he even managed to leave the house on that occasion without mum and dad beating the absolute crap out of him. It’s now up to Argentinian police to actually track Leandro down – let’s hope they catch him sooner rather than later.

For the 20-year-old nursery worker who had sex with a 13-year-old boy after seducing him over video games, click HERE.