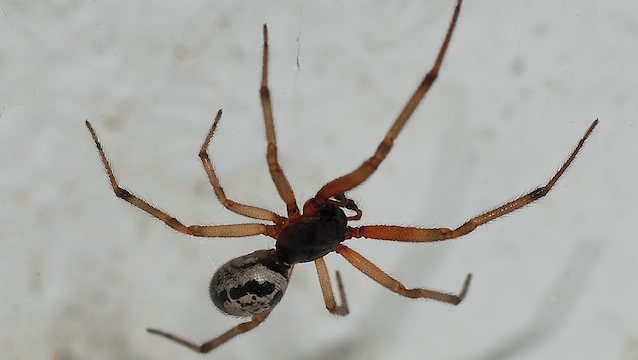 The false widow spider is the deadliest spider in the UK, and there are more of them now than ever before.

That spider up there is known as the false widow spider and there have been sightings of more and more of them recently in London and Kent. This is partly due to climate change in the area allowing them a more hospitable living environment in which to breed.

The false widow spider is only about the size of a fifty pence piece but that doesn’t mean its venom isn’t poisonous and can’t completely mess you up if you end up getting bitten by one of them. This is exactly what has happened to a couple of unlucky victims in the past few weeks.

A guy called Alex Michael, who is a 36 year old tattoo artist living in Sidcup got bitten by one a few weeks ago and it caused his hand to swell up like a balloon and turn yellow and black. It remained that way for five weeks before his doctor prescribed him some antibiotics and it finally returned to normal.

Another guy called Paul Lakeman from Greenwich felt the spider get into bed with him on his shoulder but he avoided getting bitten as he managed to flick it onto the floor before anything happened. But still, it was a close one and I know I wouldn’t enjoy finding one of those little dickheads in my bed.

The population is expanding rapidly, with one dude from Kent called Andy Pitty stating that he saw around 50 spiders across three of the fences in his garden. He said that he saw a bunch of baby spiders there and so knew that they were breeding. He was also very fearful of them coming into his house and biting him.

Usually the spider is only dangerous if you’re attacking it or trying to catch it as they don’t normally have a desire to get involved in violence, so if you see one don’t try and catch it and just hope that it slinks off somewhere and away out of your life. If you do get bitten by a spider, then just head to your local hospital or doctor and get it checked out. As well as swelling and turning your hand a different colour, you can also get chest pains from a bite so if you’re not feeling so good and have been anywhere near a spider it’s probably a good idea to get it checked out. Nobody in the UK has died from a spider bite. Yet.

Experts have predicted that as the climate in the UK changes further they will slowly migrate north of London. It probably isn’t such a good idea to have a bunch of poisonous spiders taking over the country – even if they only attack when provoked – so maybe if you do see one then try and kill it instead of just staring it down. Be careful though, yeah?

â˜› More Spiders: How Would You Catch This Huntsman Spider?