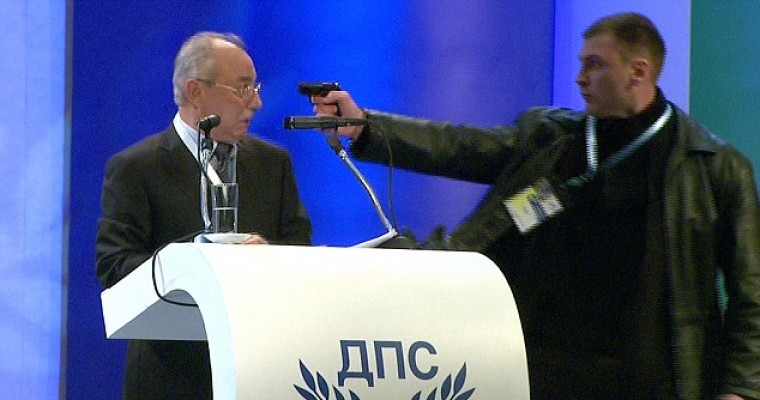 A Bulgarian politician got a gun put to his head in the middle of a speech, but the gun misfired and the attacker proceeded to get the absolute crap kicked out of him by the inept security guards.

This is absolutely incredible.

A few hours ago, Ahmed Dogan, leader of a political party in Bulgaria, was two misfired shots away from being assassinated at point blank range. And then the security guards took the attacker down and started beating the ABSOLUTE SHIT OUT OF HIM. And thanks to video cameras and our beloved internet, you can watch the whole thing right now:

How crazy is that?! If you saw that in a movie you’d complain about it being too stupid and far-fetched.

Firstly, it’s an assassination attempt! I don’t think I’ve ever seen a real-life situation where one guy is trying to kill another guy up close, let alone pull out a gun and shoot him in the head. This is a moment of history right here. But more importantly,  it’s really exciting and cool.

Secondly, HE FAILS! How amazing and funny and incredible is that?! The gun friggin’ misfires! 3 inches from the dudes head. Aside from this being awesome obviously because the politician didn’t die and there was no bloodshed so we can all watch it and share it and laugh about it without any feeling of guilt or macabre, what are the chances of that happening?? I mean, the chances are probably much higher than I’m letting myself believe because it’s Bulgaria and they probably have a shitload of dodgy, knock-off weapons that misfire all the time. But even so, if you were gonna get up on stage in front of the whole world and try and shoot a politician in the head, you’d definitely make sure you’ve got a reliable gun. No way he just took a dodgy gun salesman’s word for it that the thing actually works. He must have fired it loads of times and practiced the whole action. He can’t have not tried it out several times. I’m giving him the benefit of the doubt that he isn’t THAT much of an idiot.

Which leaves 2 possible scenarios. 1) The gun worked all the time and was totally reliable every time he practiced, but it completely bottled it when it mattered, leaving the guy holding it the most unlucky guy in the history of the world (maybe I’m getting a little carried away, but I like getting carried away, so shut up). Or, 2) he had practiced/tried it out and the gun WAS dodgy and sometimes misfired, and he completely knew that as he strode up onto the stage. Which, if true, is… I don’t even… I have no words for how much of an idiot this guy is. Maybe it’s just me, I dunno, but if ‘whether the gun worked or not’ was nothing more than the toss of a coin, I wouldn’t gamble my freedom, physical well-being, welcome in the outside world and family name on getting heads. I’d back the fvck away from that toss. If it’s just me, please tell me, but I’m pretty sure you’d have to be completely retarded to take that gamble.

This guy called heads, and got tails.

Now imagine what was going through his mind at that particular moment.

Not only has he thrown his whole life away – he’s humiliated himself in front of the entire world. Then he proceeds to get taken out by a huge gang of security guards and beaten to a pulp.

Sometimes I like to think of life as a game. I haven’t figured out how to win yet, but I’m pretty sure this guy just lost.

Oh yeah and that’s the third thing that’s unbelievable about this video: the security guards. What the hell are they doing?!

And, as if that wasn’t bad enough, once they’ve caught the guy and have the situation under control, they start KICKING AND PUNCHING THE SHIT OUT HIM. How can they possibly think that this is a) their right as security guards, b) helpful in any way or c) acceptable on any level? Guys, you’re being paid to protect people, and control dangerous and heated situations. You’re not being paid to take it in turns to go to town on anyone you catch. You’ve caught him, he’s under arrest, he’s either gonna get executed or raped in jail for the rest of his life, depending on how Bulgaria like to deal with their bad eggs. You don’t get to carry out your own form of justice on him. What, just because you’re in a suit and you have a tag around your neck, you get to assault criminals when their already on the floor and safely caught? No. That’s not how it works.  Would it be ok if everyone in the room went “Fvck it!” and joined in? Would it be ok if you beat him until he died? Would it be ok if you brought him to the town centre the next day and made a public event out of delivering your own punishment? Yes? Congratulations, you’ve justified stoning.

In fact, they’re making the situation worse. Their making everyone more scared and angry and charged up. I think I’m more pissed off with the security guards and officials than I am with the friggin’ assassin. (Failed assassin, lulz). That guy’s just one twisted or desperate knobhead/idiot/mental patient that is inevitably going to exist. They always exist in every society and culture. We expect them to exist so much so that we employ a team of guards to protect the most passive and harmless of leaders and speakers. And yet, when the guards actually come up against one, first, they’re fatally ineffective, and then they seem surprised and offended that this guy exists to the extent that they forget where they are and what they’re supposed to be doing and take personal vengeance out on him. It’s like they don’t understand the fundamental reason they’re there. What a bunch of tossers. And these are government employed officials.

â˜› More beatings: Referee Gets The Absolute Shit Kicked Out Of Him By Whole Team Of Players

The ineptness of the guards and animalistic response by everyone scares me a hell of a lot more than the assassin, because I knew the assassin existed before I had a face and situation to give him. We all did, because dicks and idiots exist everywhere. What I wasn’t aware of, in this day and age, was how unprepared we are for them. Hopefully the fact that it’s only Bulgaria is the key factor, and that if this happened further west things would have played out differently. Although the quality of the assassin would have been higher as well, so, I don’t know what would happen. If I was trying to assassinate someone I’d do it the proper way – buy a massive sniper and a load of scran and do the business from a mile away. Hey, that rhymes.

Check this gnarly pic of his beaten face. What an idiot. 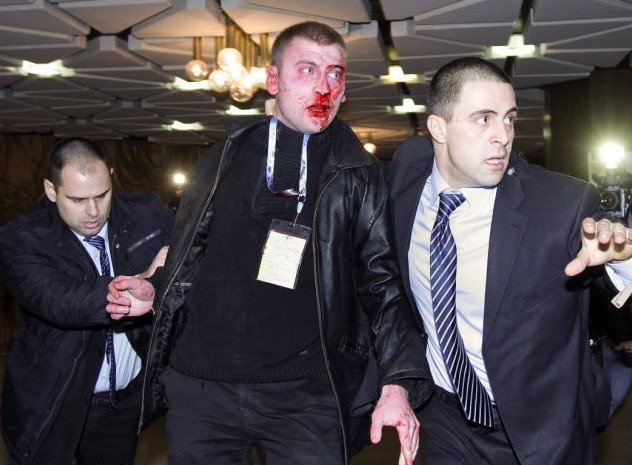 I’ve gambled quite a lot on the guys serving the beating being security guards and not just other politicians/conference attenders, who are probably slightly less outside of their rights to go and give him a good kick. (Only slightly, because they hadn’t previously failed at their job). For that reason I’m gonna go ahead and say I just looked it up and they definitely are security guards. They definitely are. I swear. Just trust me on this. Definitely.

My last comment is saved for Ahmed Dogan. He handled it like a champ. He got a standing ovation when he came back to the stage. He goes into the boss book for sure. That roll on 0:05 is pure internet gold.

Oh and enjoy this thing while it lasts because it’ll probably be a meme soon and it’ll piss you off.