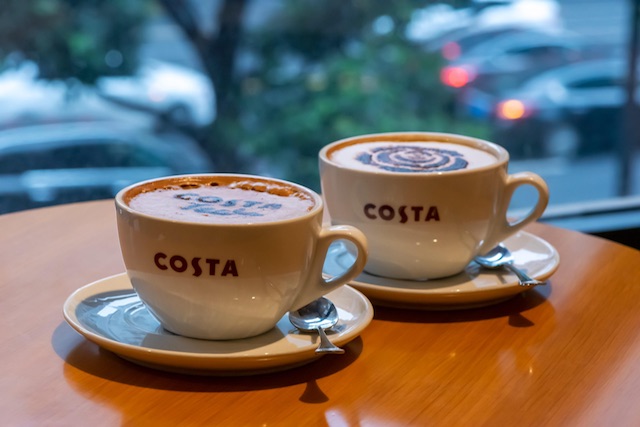 Everyone is kinda/sorta worried about going out to restaurants/pubs/coffee shops at the moment because of Coronavirus, but you can see that some places are making more of an effort than others to try and make the experience safer in light of the new guidelines.

I haven’t visited a Costa Coffee since the pandemic, but Channel 4’s Dispatches decided to test a few of the surfaces within different stores all over the country for a show last night and discovered that branches in Birmingham, Cardiff and Edinburgh all had high amounts of faecal matter on them. The team also tested surfaces at Britannia hotels and found high levels of faecal matter in branches in Liverpool, Newcastle and Edinburgh and bacteria growing on television remotes in four of the five branches they visited, despite the remote coming in a plastic bag claiming to have been sanitised.

They also tested Tesco trolley handles and found that some in Falkirk, Nottingham and Birmingham had high levels of bacteria on them, although also that some in the same car parks had no sign of bacteria whatsoever.  Here’s the official line from a series of tweets from their Twitter account:

We tested 6 sites of the UK’s largest coffee chain Costa Coffee & 5 sites of budget hotel group Britannia. Both say they’re upping cleaning to counter coronavirus transmission, but is it working? 2/

In freshly cleaned rooms in 3 branches of Britannia hotels in Liverpool, Newcastle and Edinburgh we found indicators of faecal coliforms on surfaces in the rooms. 4/

We were not testing for the presence of Coronavirus but if large amounts of bacteria are detected on a surface that’s supposed to be sanitised that can indicate the cleaning hasn’t been up to scratch. 6/

Yeah, I don’t really think that this should be that surprising to anyone because it seems to me that there’s going to be at least a couple of employees at these massive national companies that are going to be a bit lackadaisical in their sanitation technique that will result in these problems and there’s no way that anyone can really legislate for that unless they keep a stringent eye on them which isn’t always possible. Sure, it’s rank that there’s faecal matter on the table but the truth probably is that there’s poo particles everywhere floating around and you come into contact with them way more than you probably think.

Obviously it’s a bigger deal during Coronavirus though because it means that the tables aren’t clean and might be harbouring COVID-19, but the best practice is just to keep washing your hands all the time with hand sanitiser if you’re going anywhere. Or if you’re really that scared just don’t bother going at all. It’s still going to be a very long time before any of this gets any better.

For more of the same, check out when poo particles got found on every single screen in McDonald’s once. Told you it was more common than you think.